Just in time for Mother’s Day, I started working on this Mayoi Mai Mai post. And now it’s here. Late.

Mayoi Mai Mai is perhaps most interesting for its relation to the overarching story of Bakemonogatari, and thus what it reveals about Nisio Isin’s storytelling (and storytelling as a whole). The first thing that comes to mind when I think of this arc is the twist that Araragi is in fact the character who encounters an apparition. We can say that the mystery of the arc relies almost entirely on one “lie”: that Hachikuji is alive. Of course, this brings about a bunch of secondary lies like Senjougahara pretending she can see Hachikuji, but the story pivots on that one main lie. 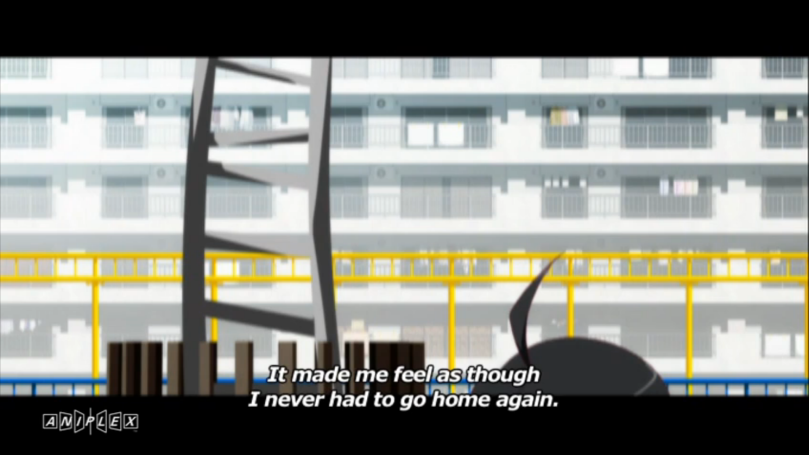 Every arc in Bakemonogatari is set up this way. There is a “lie” in the timeline of Senjougahara’s childhood, a lie in the conditions of Araragi’s fight with Kanbaru, a lie in the number of snakes affecting Nadeko, and even a lie about Oshino’s actions in the Tsubasa Cat arc. These lies make each mystery unsolvable until they’re discovered—at least from Araragi’s/the audience’s perspective. And this is the arc where Araragi’s perspective really starts to take over. He colors both our expectations and our moods. When he reflects that the park is empty and he feels like the only person on the planet, that gives us a great sense of his current headspace, as well as a subtle motivation for his attachment to Hachikuji. Or, actually, “evidence” may be a more accurate term than “motivation”. END_OF_DOCUMENT_TOKEN_TO_BE_REPLACED

With the second season of Owarimonogatari on its way, I’ll be rewatching the Monogatari series so far and giving my thoughts arc by arc. I’ve wanted to talk about the series (outside my posts on Owari) for a while now, but was never sure what I wanted to say. I didn’t have a concrete idea for an essay. These posts will be a good opportunity to just let the thoughts flow freely and see where I wind up. That being said, let’s take a look at the Hitagi Crab arc, and our introduction to the wonderful world of Monogatari. 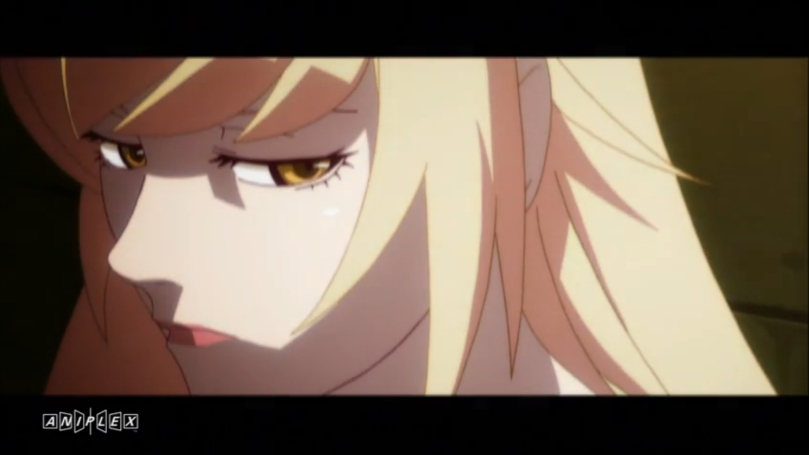 Incidentally, our introduction is one somewhat lacking in orienting detail. I’ve always found it an interesting choice to start Bakemonogatari after the events of Kizu- and to not ever make those events clear to the audience. The anime staff must have thought so as well, for they included a montage of said events—something the novel lacks entirely. Although we do miss out on an easy focalization with Araragi as a result, I don’t think the story suffers for it. We don’t need to become acquainted with the aberrations of this world by experiencing them through the eyes of an equally ignorant character. The paranormal in this world tends to build off of traditional folklore or else flip it on its head in some way. As such, a big part of the series involves explaining why aberrations are the way they are. END_OF_DOCUMENT_TOKEN_TO_BE_REPLACED

Death Note: An Absence of Character

It’s a common sentiment among anime fans that the second half of Death Note is less engaging than the first. Yet, most fans manage to finish the show by riding out the waves of suspense and tragedy from the first half. So, what changed from the first half to the second? Why do so many people use the first half to justify enduring the second? The obvious and unfulfilling answer is that L dies and the careful cat-and-mouse game established between him and Light vanishes with him, but that isn’t true in and of itself. L’s death just causes the anime to fail harder at something it had already begun to struggle with—that is: to be thrilling. We should begin by examining Death Note’s most successful moments of intrigue and suspense. The FBI arc involving Raye Penber and Naomi Misora is the anime’s most well-executed arc by far, and the pacing and scope of the arc play a major role in this. This all begins in the bus-hijacking scenes, where we are clued into a lot of important details about how Light interacts with enemies of his plot. We are never given all of the notes to Light’s plan, but we can infer a lot based on the rules of the Death Note and Light’s actions and thoughts. When the hijacker arrives, Light thinks, “He’s here!” before the hijacker even pulls out a weapon. Light’s subsequent calm demeanor confirms for the audience that he planned for this hijacking. But to what end? Raye Penber handing over his identification answers that question, completing a logical loop. END_OF_DOCUMENT_TOKEN_TO_BE_REPLACED

Bungo Stray Dogs started the season strong with an episode that kept your eyes on the screen (really this whole season is super diverse and interesting so far; hopefully the quality keeps up). Stray Dogs kept viewers interested due in part to its execution of mystery, but also possibly flubbed in that execution. Let’s figure out how this show succeeded and flubbed, and why flubbing in the first episode might actually be a great idea. 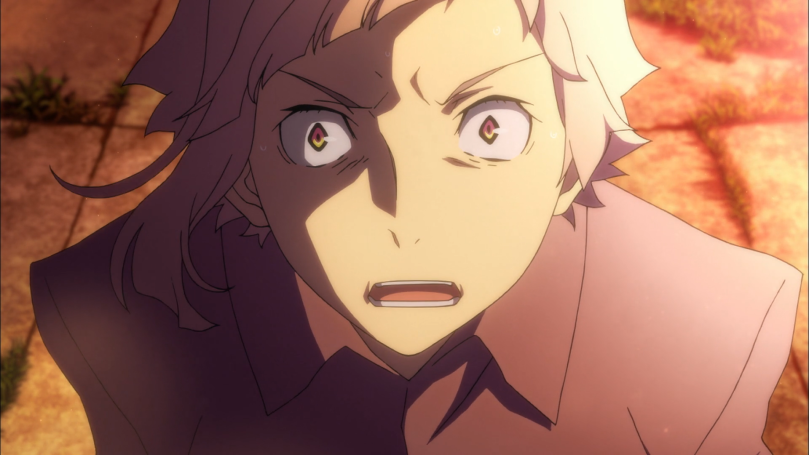 Let’s get to the point: Stray Dogs eventually makes it obvious Atsushi is the man-eating tiger. The first sign of his ability comes in the first scene. When waiting for a passerby to rob, Atsuhsi’s eyes flare as his senses pick up the presence of different humans. Although this is just used for a joke, his awareness certainly gives off the vibe that he has some sort of power. END_OF_DOCUMENT_TOKEN_TO_BE_REPLACED

Amongst all the comedy, fanservice, and “meta-critical” dialogue, it’s possible to forget that the –monogatari series is fundamentally a mystery story. Nisio Isin is a mystery author obsessed with mysteries. Every story arc of the series focuses on a specific mystery that Araragi/occasionally another character/always the viewer must unravel to reach a resolution. Rarely does the plot move by present action, and most actions taken in the present are simply devices to explore the past. Any troubles in the present are the result of something that has happened, not something that is happening. 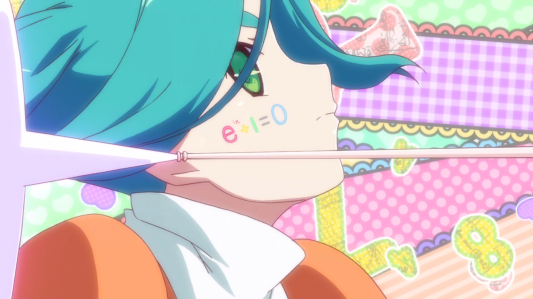 As such, I’d like to consider how ­–monogatari’s creates effective mystery and uses that mystery to build an interesting story. One could argue that the series is carried by its dialogue and fanservice, but I think that—without effective mystery—we’d simply have a harem series for the desperately avant-garde that’s boring enough to undo any amount of coffee. In other words: the series’ mystery attaches relevant stakes to otherwise random and insignificant scenes. 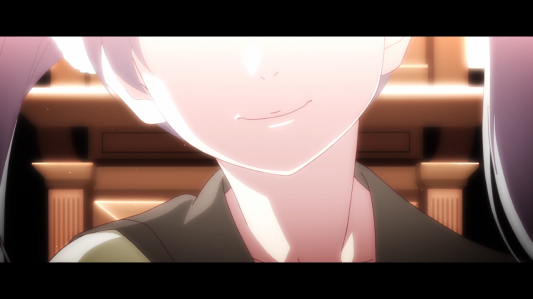 Episode 3 is the perfect episode to explore one way that the series creates effective mystery. This episode flips dramatic irony on its head, and uses it to string along the viewer, and make us overconfident. For example, we probably suspected that Oikura left Araragi those letters in his locker, and that she was the one meeting him at the ruined house. As soon as she opens the door, we’re able to recognize her character design and confirm our suspicion. The viewer is certain that this girl is Oikura, but Araragi doesn’t know, as shown by Oikura’s eyes being hidden and her voice excluded for most of the flashbacks.