While I don’t have any arguments I want to “correct” from my original analysis of Kumiko, I do have a lot to expand upon. In particular, we can take a deeper look at Kumiko’s first experience with true failure. This is the most pivotal moment for Kumiko’s development in Season 1, and Hibike puts maximum effort into growing its previously passive protagonist. Let’s take a look at all the elements that come together to create the emotional climax of Season 1. 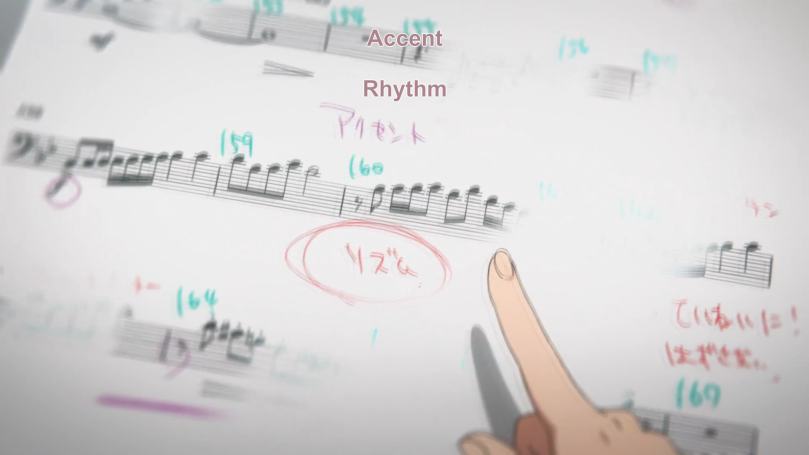 Thus far, light has always been a motif for characters to strive after. Light is where passion and love lie and where characters move forward. We’ve always wanted characters to embrace the light. We might even assume light is purely benevolent, but this is not the case. Light is where passion lies, but—for Kumiko—that is exactly the problem. The new sequence that Taki asks the euphoniums to play is dizzyingly difficult for Kumiko, and the first challenge since her hike with Reina that she struggles to overcome. The old, detached Kumiko might avoid facing this challenge, but the Kumiko who wishes to become special must attack it head-on. END_OF_DOCUMENT_TOKEN_TO_BE_REPLACED

We can attack Episode 10 from a few different angles. Characters like Asuka and Kaori get some needed development; a new conflict for the band is born; some interesting directing stuff is going on. But as interesting a topic of Asuka is at this point, I still don’t feel like there’s enough evidence to properly analyze her/her actions (especially considering how large a role she’ll play in Season 2). I also feel that any analysis of other specific topics would be redundant at this point. Instead, Episode 10 is best investigated as a figurative mirror of past conflicts and drama. This mirror is most apparent in the main conflict of the episode: the band’s suspicion that Taki played favorites in the audition for the trumpet solo. Back when Taki threatened to keep the band out of SunFes, the band reached an impasse where practice halted and the section leaders met to plan their course of action. The band (with a few exceptions) unified against Taki until the conflict was resolved. In Episode 10, the band has likewise reached an impasse and has returned to playing in sectionals. What is different from last time is that a band member (Reina) is also a target for the band’s animosity. Additionally, Taki was in control of the band at the start of the season, but has lost control of the audition situation. END_OF_DOCUMENT_TOKEN_TO_BE_REPLACED No one can walk the painful path alone, no matter how special they wish to be or how high they aspire to reach. This was where Reina’s social troubles stem from: she winds up isolating herself by her attempts to achieve specialness. I ended my analysis of Reina by saying she can become special not by pushing other people away, but by reaching out to them. That is the core of Hibike’s message. Let’s see if Episode 9 can clarify what I mean. END_OF_DOCUMENT_TOKEN_TO_BE_REPLACED

Although Episode 8 begins to connect all the motifs and themes we’ve been looking at so far, there’s still a key ingredient missing before we should tie all those ideas together. I’ve alluded to it when discussing Romanticism and light and several characters, so now is the perfect time to flesh out the idea of “abandon”. Taki stops practice in order to demonstrate the “abandon and shamelessness” that the band should play the “Moon Crescent Dance” with. Perhaps you can already see the connections to what we’ve discussed before: the pursuit of passion requires reckless abandon. From Kumiko to Hazuki to Aoi, Hibike suggests that a solution to their troubles is to act with abandon. Even Goto and Riko come to illustrate this idea. We saw before that Goto was reserved when talking about why he loved tuba—a fact we can infer is related to his shyness about dating Riko. This shyness pops up again in Episode 8 when the duo gets embarrassed over their “secret” relationship being talked about publicly. Goto gets slightly distressed when Riko tries to hide the fact they’re dating and—though I wouldn’t call this a strain on their relationship, considering they seem equally shy about it—they misunderstand each other. This is obviously the tiniest of tiny romantic subplots, so it gets a tiny resolution when the pair attends the festival together and Goto acts with a bit of abandon by straightforwardly complimenting Riko. The look on her face tells us this is the first time Goto has been so straightforward, and thus it’s a special progression in their relationship. END_OF_DOCUMENT_TOKEN_TO_BE_REPLACED

In my character analysis of Reina, I spent a few paragraphs dissecting lighting in the moments before the audition for the trumpet solo. I explained light as representative of “being special”, which is admittedly a simplification of the truth, and relies on an understanding that Reina views band as a path towards specialness. In this essay, I’d like to begin to refine that idea, focusing primarily on Aoi and her decisions in Episode 7. We’ll revisit some concepts we establish this week in future essays with the assistance of other characters. Therefore: what does light mean in Hibike Euphonium?

Hidden beneath the surface of that first question is a second one: what does lighting accomplish in Episode 7? We interpret symbols and motifs by assigning meaning to them (answering Question #1), but that meaning is meaningless without effect (what we look for in Question #2). If a symbol can’t be logically connected to a consistent idea throughout the story, or if a symbol connects to an idea irrelevant to the story, then it enhances nothing for the audience (regardless of whether the audience is viewing for entertainment or analysis). In rough analogy: if the hammer strikes the nail at random angles, or doesn’t strike the nail at all, why bother with the hammer? END_OF_DOCUMENT_TOKEN_TO_BE_REPLACED

Sound of Love (Part 1) – On Beginnings

With Season 2 of Hibike Euphonium just a few months away, and given my infatuation with the show, I’ll be writing through every episode of the first season. This will be different from my Owarimonogatari series in that each essay most likely won’t focus on a single particular topic. I’ll just be detailing whatever stands out to me in the directing, animation, story, or sound as I watch, and trying to expand upon my earlier essays on this show. I’ll being referencing and linking to those essays a lot. By going episode by episode, I can point to details that didn’t fit in the original essays, as well as moments that are worth talking about, but don’t warrant an entire essay.

So although this series will be rather analytical in nature, it’s really more of a confession of love. Hibike is a masterpiece in so many ways, and hopefully throughout this series I can share with you some of what makes it so special to me. This first post will be on the shorter side since the first episode can only do so much, but there’s still plenty to talk about. On that note, it’s only right to start the same way as always: let’s figure out Episode 1 of Hibike Euphonium. END_OF_DOCUMENT_TOKEN_TO_BE_REPLACED