After looking in-depth at Reina, it only makes sense to move to Kumiko next. Kumiko is Hibike’s true protagonist, and the only character whose thoughts we get to hear. I will say that there were several motifs and symbols that could be discussed when analyzing Kumiko, but (due to a gap between my understanding of these symbols and the cultural background of this story’s creators) I chose to focus on more universally understood details. 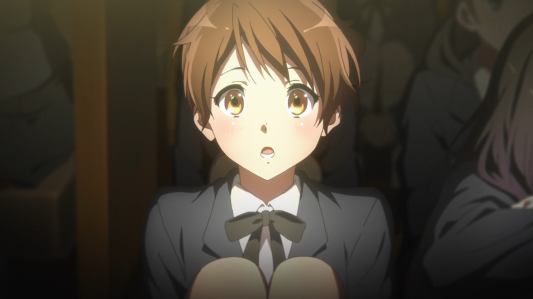 To no one’s surprise, we have to begin at the opening scene. We need to learn a history that leads into high-school-aged Kumiko. In middle school, Kumiko knows that the band set a goal to make Nationals, but she only puts one foot in the water. When the band gets dud gold, Kumiko has a moment of disappointment as she realizes they failed, only to hide from that feeling by shifting to her foot on dry land. Oh, we didn’t really stand a chance, so we can be proud of what we did accomplish, she thinks. She hides.

She is hiding from pain and passion. Reina’s reaction is everything that Kumiko hopes to avoid. Kumiko doesn’t want to cry or feel defeated because those feelings are scary. She won’t stay until the bitter end, she’d rather turn tail at the first sign of disappointment. 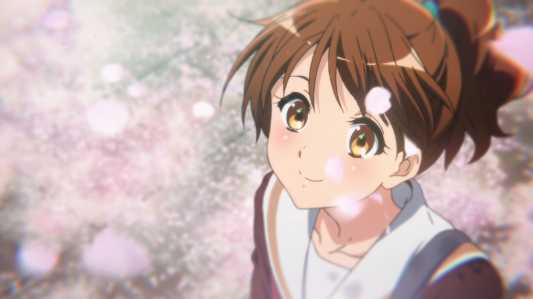