True to my word, there will not be any consistency in the format of these posts whatsoever. We’re just following my whim here, and my whim for this week is to not use those helpful section breaks again. But don’t worry! I’m sure I’ll switch back soon enough. My inconsistency is my consistency.

We could debate whether this episode or the next is the real start of Fuko’s arc, considering this one is divided roughly in half between general exposition and actual Fuko content. Even so, we’re presented with the main conflicts of the arc (Kouko’s wedding and Fuko’s hospitalization) in this episode, which inevitably focuses our attention entirely in Fuko’s arc. Since things are about to get more serious over the next few episodes, I figured we’d take a moment to talk about Clannad’s (perhaps I should say Jun Maeda’s) humor.

Obviously the straight man is an essential comedic archetype across cultures, but (at least in my experience) its incarnation in Japanese comedy seems especially common and pronounced. From traditional manzai to its representation in variety shows to “tsukkomi” and “boke” becoming archetypes we apply to anime characters almost in the same way we would a term like “tsundere,” comedic styles involving straight man types are extremely prominent in these media. I also believe the writing of straight man/tsukkomi characteristics into stories like anime is more intentionally designed by creators and more evidently picked up by consumers. Like I said, we point to characters in anime and call them tsukkomi, but we never really do that for characters in Hollywood comedies. That is judgment we reserve for something like Abbott and Costello, though even then we don’t think so concretely about the roles. Of course, this is just anecdotal analysis, but I think the jist of it holds true. END_OF_DOCUMENT_TOKEN_TO_BE_REPLACED

Our third week of Clannad brings with it a third post and a new format. The past two posts have been arranged as a chronological flow of analysis that I tried to demonstrate some kind of logical progression within. That structure worked well enough, but I also feel it has its shortcomings. Partly as a matter of remedying those shortcomings and partly because the main ideas of this post will be more difficult to link together into a coherent storyline, I’m experimenting a bit with structure this time. I want to divide my thoughts into clear sections.

Clannad is a story made up of a lot of key recurring elements, and one of the best ways to engage with it is to trace those elements throughout the series. For that reason, organizing posts into distinct sections that clearly mark which specific element they deal with might make that job of “tracing” easier for both you and me. All that being said, I’m not committing to this structure by any means. I’m leaving myself open to continue experimenting or to return to old structures–whatever seems to fit the episode and topic at hand.

The above text has been my own repeating element: some unnecessary ramblings about my writing process for these posts. I’ll apologize for wasting time, but I can’t promise I’ll stop. Anyway, on to the show. END_OF_DOCUMENT_TOKEN_TO_BE_REPLACED

Welcome back to our long climb. I have no doubt in my mind that the hardest part of this project will be thinking up new introductions for each post. Well, at least I’ve gotten this one out of the way.

Last time, we opened up a lot of puzzle boxes about the relationships between time, change, life, and death. Our characters are going to be working through these puzzles all story long, trying to sort out their own feelings towards these topics as we make our own interpretations. Behind all of this is an emotional thesis: “I hate this town.” I had begun to clarify that “town” shouldn’t be taken entirely at face value. The “town” in question is more than just a location with geographical borders and city ordinances, etc. As we’ve already heard from Tomoya himself, part of what the “town” encompasses is the idea of his school days–their repetitive, boring nature that serves as nothing but a brief respite from his home life. 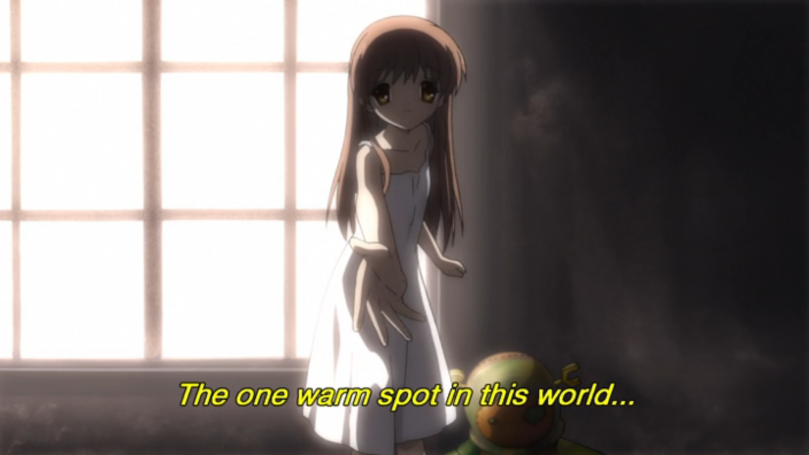 We’ll flesh out our idea of the “town” just as we build up our understanding of those puzzles I mentioned. END_OF_DOCUMENT_TOKEN_TO_BE_REPLACED

What Matters in Storytelling: Plot Holes and Other Nonsense

I thought this issue would be something I could make fun of on Twitter and then forget about, but it continues to show up online and offline. At this point, I just want some selfish catharsis. More than ever, I see people focus their criticism on parts of stories (read: anime and movies) that simply do not matter or, at least, matter so little as to be inconsequential. This has always been an issue and probably always will, but I say “more than ever” because I think the kinds of anime and movies that are getting the most attention lately have set themselves up for these kinds of vapid criticisms.

I divided these criticisms that “don’t matter” into two types for the sake of organizational ease. They could (and should) be broken down even further, but since I’m not trying to wage intellectual war or anything, I left them as broad categories. I will be mentioning certain creators by name in this post, but that’s mostly for the sake of example. I’m more concerned with the arguments than the people making them.

I’m presenting the following list of “what doesn’t matter” as factual because I believe it is factual. That doesn’t mean that people are “wrong” for pointing out things that fall under these categories, but that–however true what they’re saying is–it ultimately doesn’t matter for the function of a story. If you want to deny what I’m presenting as fact, that’s fine too. I’m just expressing the rules I follow, not decreeing law. Although it would be cool if I could make it law…

Karen Bee is Nadeko Snake’s longer and more bearable cousin. The arc is of an overall higher quality than Nadeko Snake, but that quality is stretched across an absurdly indulgent seven episodes. By the time the arc finishes, you’ll have trouble remembering which moments were part of it and–more importantly–which even mattered. Most of the arc is a collection of decent (or even great) standalone scenes mashed together with a bit too much narrative freedom.

Although there’s no way to prove a claim like this, and though proving it would accomplish nothing, I feel that Nisio Isin wrote many of Karen Bee’s scenes without any intention of ever making a single story out of them. The narrative structure of the arc reflects this with its unmotivated flashbacks and checklist of fanservice cameos. The arc opens on a scene of a bound Araragi, rolls the opening theme, then flashes back to the day before without any trigger. Nonlinear storytelling is useful as a narrative hook–we do wind up wondering how/why Araragi was captured by Senjougahara–but feels cheap when most of what we see in the flashback is irrelevant to the story. END_OF_DOCUMENT_TOKEN_TO_BE_REPLACED

The Explosions of Anime Melodrama

Spoilers for Your Name, Toradora!, Kuzu no Honkai, Mashiroiro Symphony.

International record-breaker Your Name features plenty of destruction, including the exploding of an electric substation towards the end of the film. This moment stands out not only for the fact that it is the first instance of heightened action in the movie, but also for how it represents the communicative struggles of the movie’s characters. The scenes that involve Mitsuha’s father and bookend the comet sequence provide an interesting glimpse into a major motif of the melodramatic mode. Before the comet strikes, Taki–through the life of Mitsuha–attempts to explain Itomori’s peril to Mitsuha’s father. Of course, he doesn’t believe Taki and says all this “nonsense” about the comet is just “madness” his daughter inherited from the Miyamizu family. There’s a lot packed into this scene, but the key point is that what Taki tries to express to Mitsuha’s father is rejected. He is unable to communicate his fears, desires, and knowledge to the mayor. As a result of this, he, Tessie, and Sayaka have no choice but to proceed with their plan to blow up the substation. Because verbal communication is not an option, an explosive physical expression seems like the only way to save the town. END_OF_DOCUMENT_TOKEN_TO_BE_REPLACED

A Halloween Anime Worth Its Salt

While easily dismissible as an edgy or pandering manga adaptation at first glance, Black Butler is surprisingly polished and well-realized. The show’s most striking feature is perhaps its atmosphere. Upon a sturdy Victorian gothic foundation, Black Butler builds upwards to great heights of conspiratory urban fantasy with embellishments of black comedy, Western witchcraft, German horror, and more. Although some of these macabre elements are more derivative than they are inventive, the show manages to piece together its own unique brand of horror. It’s a show I have to recommend for Halloween. As that opening description suggests, Black Butler plays off the horrific elements of much of Western art and history—a fitting catalog for a story set in London. The first episode of the series takes the grim (and often redacted) moments of classic fairytales and pre-Renaissance folklore and sets them in the Phantomhive Manor. A haunted house, essentially. A hive for phantoms. END_OF_DOCUMENT_TOKEN_TO_BE_REPLACED

Back to top
Minute Art
Create a free website or blog at WordPress.com.