True to my word, there will not be any consistency in the format of these posts whatsoever. We’re just following my whim here, and my whim for this week is to not use those helpful section breaks again. But don’t worry! I’m sure I’ll switch back soon enough. My inconsistency is my consistency.

We could debate whether this episode or the next is the real start of Fuko’s arc, considering this one is divided roughly in half between general exposition and actual Fuko content. Even so, we’re presented with the main conflicts of the arc (Kouko’s wedding and Fuko’s hospitalization) in this episode, which inevitably focuses our attention entirely in Fuko’s arc. Since things are about to get more serious over the next few episodes, I figured we’d take a moment to talk about Clannad’s (perhaps I should say Jun Maeda’s) humor. Obviously the straight man is an essential comedic archetype across cultures, but (at least in my experience) its incarnation in Japanese comedy seems especially common and pronounced. From traditional manzai to its representation in variety shows to “tsukkomi” and “boke” becoming archetypes we apply to anime characters almost in the same way we would a term like “tsundere,” comedic styles involving straight man types are extremely prominent in these media. I also believe the writing of straight man/tsukkomi characteristics into stories like anime is more intentionally designed by creators and more evidently picked up by consumers. Like I said, we point to characters in anime and call them tsukkomi, but we never really do that for characters in Hollywood comedies. That is judgment we reserve for something like Abbott and Costello, though even then we don’t think so concretely about the roles. Of course, this is just anecdotal analysis, but I think the jist of it holds true.

I bring this up because the usage of tsukkomi characters/characteristics in Clannad is bizarre. More specifically, it’s anti-formulaic. I think this is a theme in everything Maeda works on (which is why I attribute it to him more than Clannad or Key in general), and makes his comedy flow freely in any scene with any combination of characters. No one character is ever locked into being the tsukkomi all the time, or even for the duration of a particular scene. Anyone could play it straight at any moment. How the tsukkomi elements of comedy manifest in actions/dialogue is also unpredictable, with what is “straight” about the exchange often being ridiculous in its own way. Of course, Tomoya is our ultimate tsukkomi throughout the series, but that doesn’t mean he always plays that role. Likewise, Sunohara–our ultimate boke in a sense–gets to play it straight fairly often. Take Sunohara’s first interaction with Fuko, for example. Fuko begins the scene playing a more boke role: ignoring social etiquette, calling people weird, becoming overly fixated on whether or not she’s making exaggerations. Tomoya plays it straight by playing along and acting grateful for her (not) exaggerated (not) compliment. Fuko also plays along by matching Tomoya’s etiquette and bowing in return. This exchange is already quite fluid, with the conceit of what exactly is absurd being passed back and forth between the two characters.

Sunohara shows he can work the comedy just as fast. At first, he plays up a tough guy attitude in response to being called weird, then acts genuinely offended, then misinterprets Fuko’s request to talk to the “weird guy,” and finally flips his misinterpretation of the dialogue into Fuko’s miscommunication. It would be one thing if someone said, “I want to talk to you,” to one character, and a third character assumed it was a plural “you” and tagged along. That’s just boke. However, Sunohara is able to flip the misunderstanding back onto Fuko. “You said I was a weird guy too,” he tells her, and her over-the-top reactions turn her into the boke. It’s a rapid role reversal, and we’re constantly flipping between laughing at the boke side or the tsukkomi side of the exchange. 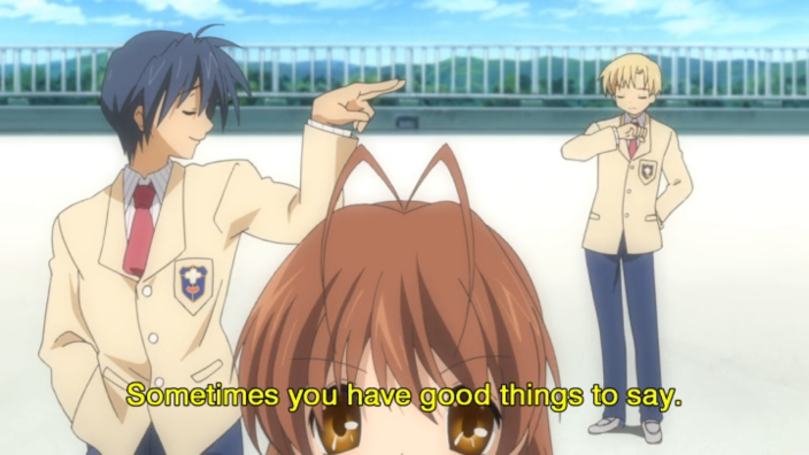 We don’t necessarily have to look at specific scenes to think about this either. Take Tomoya as a generalized character–I called him our ultimate tsukkomi, which you might have actually disagreed with. After all, he’s a huge prankster and loves causing misinterpretations just as much as he loves rectifying them. In that sense, he’s a tsukkomi who’s willing to act like a boke just so he can ensure he has absurd situations to react to. That’ll happen a few more times in this episode alone! I won’t spend the whole essay dissecting them, but this is all worth coming back to once we get to Kotomi’s infamous comedic training, so look forward to that.

I said we were going to talk about Fuko’s arc though, so let’s get on with it.

Much of this first episode is spent establishing how overwhelming the odds are against Fuko’s goal. The very idea of getting the entire student body to attend one wedding–even a pop idol or princess’s wedding–is impossible enough. For that reason, we might distinguish it as the “conventional problem” of the arc. It’s a convention. It’s an immediately obvious obstacle, the sheer magnitude of which makes us root for the protagonist and recognize how hard they’ll have to work to succeed. It’s what convinces us to come along for the ride of the story at first. There are plentiful examples in other shows: Bocchi’s goal to befriend everyone in her class in Hitoribocchi; the mission to return Holo to Yoitsu in Spice and Wolf; the service club contest in Oregairu.

Yet, we distinguish these as conventional problems specifically because they are not what is really the problem. There’s some relation to the idea of a McGuffin here, but “conventional problems” aren’t quite as empty of meaning as something like the Maltese Falcon is, and it would be inaccurate to say convention is always solely in service of plot. There is some element of character and emotion in Holo’s desire to return north, for example, but it isn’t exactly where the real drama lies. There are other issues at stake that take center stage, that are more essential to character, and that provide the richest depth to the story. The conventional problem is a logical vehicle for those other issues.

To return to Clannad, Fuko’s conventional problem of hosting her sister’s wedding is a vehicle for other issues along the lines of themes we’ve been outlining in the past three posts. The first of these arises almost immediately after we learn of Fuko’s goal. Tomoya remarks how Fuko’s task is particularly impossible given the fact that any students who knew her sister as a teacher have since graduated. Kouko’s impact on the school could, in that sense, be said to have vanished. In the context of hosting this wedding, she may as well have never been a teacher at all. Time has swept away–has changed–her existence/presence at the school. Her efforts and memories are gone (as far as whether students would care about her wedding), much like the drama club. 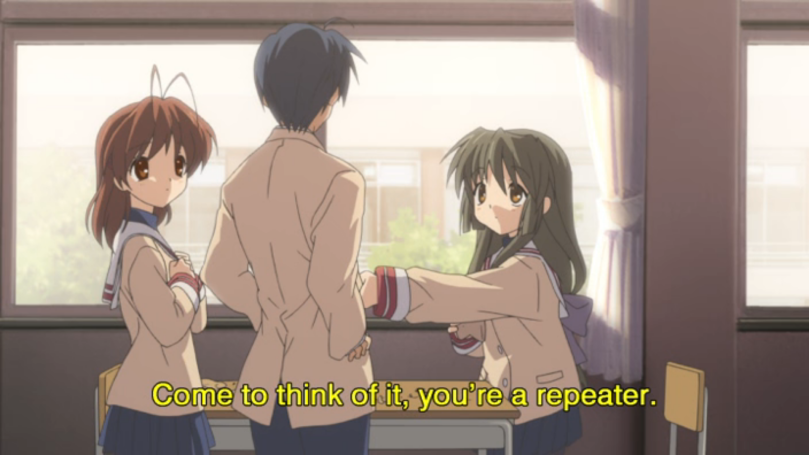 Nagisa will provide some degree of counterargument to this depressing claim soon enough by virtue of being a repeater, but Kouko’s fading connection to the school will remain a problem. Even if Nagisa remembers Kouko, it’s another issue entirely to rally the school behind an otherwise forgotten teacher. This has ramifications for the value of agency and activity–the forces that seemed capable of enacting change in a stagnant world or enduring change in a fluid world. On one side, there’s an argument that whatever Kouko has done at the school is now rendered meaningless by the passage of time. On another side, Nagisa is proof of Kouko’s lasting impact on the school via its older students. 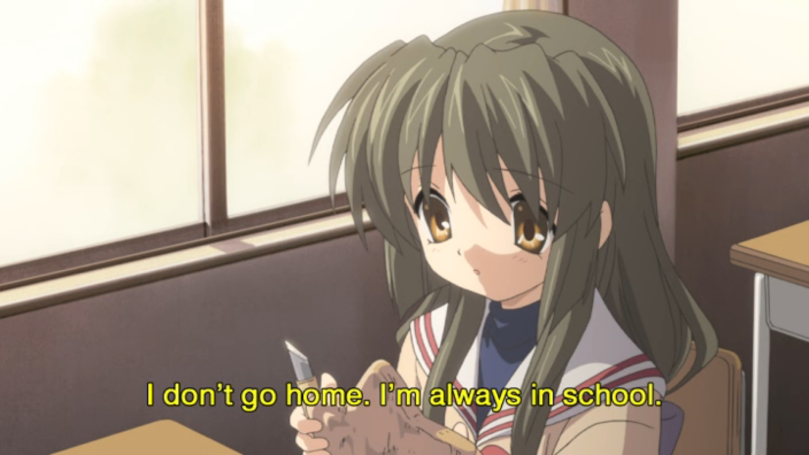 A related problem carried along by Fuko’s arc–and what will be the core emotional dilemma moving forward–is Fuko’s own existence. Her “life” as presented in this episode is one of pure repetition. She carves starfish after identical starfish all day and all night. She is “always at school” and nearly always in the same art room (thus the structure of visual novels serves the story yet again). She is, in her own way, a repeater. Yet, her existence is also “built” out of the same elements that make Nagisa a repeater.

By that I mean she is a relic of the past in much the same way Nagisa is. There isn’t quite enough information in this episode alone to make my point, so I’m going to snatch a bit of detail from future episodes as well. We learn eventually that Fuko is some sort of spirit incarnation of Kouko’s younger sister, whose actual body rests comatose in a hospital. Importantly, she is the same age as Tomoya (i.e. a third year), but her spirit is frozen at her age at the time of her accident (i.e. a first year). The Fuko we meet in this arc is thus a Fuko of the past, not the Fuko of the present. That present-day Fuko is at the hospital.

This is where the real impossibility of her mission originates.

For a Fuko of the past–a Fuko who doesn’t truly exist, who can’t truly be remembered, who can’t truly be recognized–to attempt to alter the present…is impossible. Simply, logically, intuitively–it shouldn’t work. Not without a time machine, anyway. Here we see a connection between the conventional problem (convincing the whole student body to celebrate the wedding of a forgotten teacher) and this deeper problem (the one doing the convincing is a student no one can possibly remember either). The underlying problem is later actualized in Fuko’s literal disappearance, both physically and in the memories of those around her. I believe this connection also makes clear the distinction between a conventional problem and such underlying problems. We can’t understand the depth of Fuko’s challenge at the start of her journey–there’s just too much we need to learn first. Obviously, her journey can’t begin with her fading from memory, so the conventional problem instead establishes a workable and understandable vehicle.

With this in mind, Nagisa becomes a sort of bridge between past(s) and present. She is the one student who remembers Kouko. She is the one character who knows what it means to be a repeater. If Fuko is to accomplish her impossible goal, the bridge that is Nagisa must play an essential role. Of course, our main character Tomoya will also play an important role, but the reasons why he is able to do so are not yet clear.

Those will be, as I’m sure you’ve already guessed, an essay for a later date.

One thought on “As Time Changes – Clannad #4”