The winter holidays are a wonderful occasion to spend time with friends and family, and then binge watch anime once you’ve exhausted yourself answering questions about where you’re working or going to school. Obviously the only way to replenish your energy during the holidays is by watching the adventures of a bunch of characters that can’t ask you questions (because they don’t exist). So, as we navigate the dissonant desire to isolate ourselves from social interaction by seeking companionship in fiction, let’s take a look at five good anime Christmas specials to spread holiday cheer.

Note: these are just my five personal picks that I find most enjoyable or likely to put me in a festive mood. If a description contains spoilers, I’ll indicate so next to the title of the show.

Probably my favorite slice-of-life show and one of my favorite comedies in general, Yuru Yuri relieves the stress of holiday shopping, preparation, and deadlines like none other. It’s the kind of show perfect for reminding you to take a moment to appreciate how beautiful your tree looks or how comforting it was to have the company of old friends and family. As a slice-of-life comedy should, it settles down your negative emotions and refocuses your attention on the quiet, pleasant emotions waiting beyond.

Although Christmas pops up a couple of times during the series, I have to go with Season 1’s Episode 7 for this list. For a show that thrives off its characters’ absurd relationships and quirks, the episode’s main premise about pairing off for Christmas “dates” is perfectly to-the-point. All of the main and secondary cast draw lots to see who their faux date partner will be, and from there the episode reaches punchline after ridiculous punchline. The show’s editing sequences the pairs (by cutting from one date to another) for added effect, letting the dysfunction of one pairing contrast with the awkwardness of another. 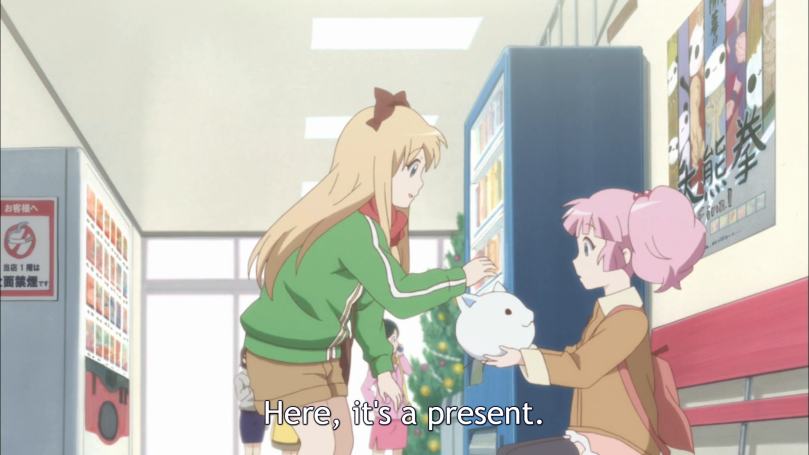 Yuru Yuri doesn’t have much of an overarching plot, but does rely on running gags and pre-established character traits for many jokes. I recommend watching the first six episodes if you haven’t (they’re all amazing anyway) to be clued in for the Christmas special. Coming in with context won’t only make the jokes hit harder, but will also make the character development that occurs this episode more meaningful. Truly in the Christmas spirit, previously disconnected relationships begin to blossom into something warmer by the end of the episode. Yuru Yuri is a fun, relaxing way to spend a holiday night.

If it wasn’t obvious from the rest of my posts, I have a soft spot for dysfunctional relationships, love triangles, melodrama, and all that other aggravating nonsense. Sakurasou is all of that with the added bonus of the entire cast being artists, which is basically like dumping an extra cup of jalapenos into your salsa. Episode 14 isn’t quite as relaxing as Yuru Yuri, but it does fill your heart with some Christmas magic. And also pain. Gotta have that pain. As the stage is set by a sudden snowfall on a cold Christmas Eve, characters come face-to-face with the tipping points of their romantic and artistic dreams. Aoyama faces the possibility that artistic failure might tear her away from the place and people she loves. Shiina faces the incomprehensible feelings in her heart that threaten to burst out. Misaki and Jin face each other in hopes of expressing themselves genuinely. Sorata faces his acceptance or rejection in the game industry. Sakurasou takes full advantage of its Christmas episode to create a dramatic turning point for the series as a whole.

Visually, the episode is incredibly moving (much in the same way a later entry in this list will be). Shiina and Sorata’s meeting takes place at a stunning Christmas set piece, complete with soft snowfall, a dazzling glass tree, a gushing fountain, and a girl in an elegant dress. The extravagant melodrama of the scene is played in contrast to shadowy shots of Aoyama and softly lit and intimate stills of Misaki and Jin. This helps keep the atmosphere of the episode’s climax gentle and melancholic despite the potentially bombastic backdrop of the Christmas fountain. The result is some sweet Christmas magic. A Christmas must-watch in the rom-com sphere.

Sometimes there’s nothing better for the holiday spirit than a simple feel-good story. The iDOLM@ASTER capitalizes on a season’s worth of prior development to deliver a heartwarming vignette about a bunch of busy idols making the time to spend Christmas Eve together. While the premise may be extremely typical for a holiday story, the payoff in the latter half of the episode is surprisingly sweet.

By the time this episode rolls around, viewers will have watched the idols of 765 Production struggle through personal and group conflicts, a lack of work, getting too much work, and more. Everyone at 765 is gradually fleshed out into a full-fledged character (and idol). Having spent 21 other episodes with the cast, it’s easy to get invested in their would-be Christmas party. Although it’s obvious from the start that the party will work out, the constant reminders of how busy the idols are, and seeing them work so hard at so many different jobs, does build towards a sense of relief once they all finally come together.

Episode 22 is an exercise in the kind of episodic or semi-episodic storytelling The iDOLM@STER excels at, complete with just the right amounts of cuteness and comedy. While it won’t blow you away, it’ll certainly put a smile on your face. And maybe make you second think buying that cake for your own Christmas party.

I had a hard time deciding what to put in this slot, but upon rewatching all the potential choices, I decided upon Gabriel DropOut. The show tries to set itself apart from the slew of recent comedy adaptations by having its main characters be angels and demons in-training (and relying on some love and affection from the staff at Doga Kobo). This conceit is hit-or-miss throughout the season, but works wonderfully in the Christmas episode.

The episode pivots on Satania’s hatred for Christmas (being the wicked demon that she is), but doesn’t ever reach Grinch levels of Christmas crisis. Instead of sabotaging Christmas joy for the world, Satania’s battle against the holiday spirit is played much more like a sitcom. Vigne is the friend/family member trying to plan the perfect Christmas, and Satania’s attack on Christmas is treated like a dinner table argument or family bickering that threatens to ruin Vigne’s perfect party. It’s a fun twist on some Christmas special tropes and the premise of the show itself.

Of course, it’s not just Satania herself that puts the party in peril. Gabriel’s devil-may-care attitude sets Vigne off a few times as well. Raphiel can’t resist torturing Satania, so even though she helps keep Satania distracted, she does so in a completely disruptive way. It’s easy to empathize with the chaos and absurdity that ensues. Gabriel Dropout is a good reminder that sometimes our fondest memories come from when our plans go awry.

To no one’s surprise, Toradora! wraps up this list with not just one Christmas episode, but a whole Christmas arc. Toradora! is a tightly written show and rather well directed on top of that, and the Christmas arc is no exception. I’ve written a fair bit about this arc in the past and way too much about the show in general on Reddit, so I’ll try to cover new ground here.

Toradora! actually spends some time exploring the more traditional values of Christmas, even going so far as to link Taiga’s charitable goodness with her experiences at a Catholic school. Seeing the typically hotheaded tsundere smile sweetly all arc and carry a mountain of presents to send to children in need is kind of beautiful. Taiga’s explanation for her actions, that she wants the children to know “that at least one person in the world cares about them,” works so well within her character and circumstances that I can’t help but tear up every time I hear it. Of course, this arc is most famous for its heart-shattering drama, so nothing stays quite so peaceful moving forward. Episode 18 sets up brilliantly for the finale, with Taiga’s crystal ornament breaking due to Minori’s accidental pop-fly and Minori’s near-breakdown as Ryuji helps her fix it. The sense of fragility the ornament gives off is woven straight into the relationships of the main cast, priming the viewer for when everything unravels in Episode 19.

Like Sakurasou, Episode 19 strikes a balance between magnificent set pieces that seem straight out of a dream (literally, in one case…) and intimate shots with lowlight. That’s the Christmas special, I suppose. But where Sakurasou ends on a melancholic or bittersweet note, Toradora! just tears you into a million pieces. Characters make tragic sacrifices, crumble into sobbing wrecks, and wind up alone–all to the notes of a soundtrack that will tattoo itself on your soul.

Watching something so emotionally charged may seem counter-intuitive after the spiel about stress I gave, but I think being made to feel emotions you normally wouldn’t is part of the magic of Christmas. When you consider the arc in the larger context of the show, the drama becomes more nuanced as well. It’s possible to appreciate how the drama of Episode 19 leads to some of the satisfying romantic endings down the road. Toradora! finds a way to make pain magical.

And there you have it: romantic confessions, dysfunctional parties, musical numbers, and silent nights. That’s five holiday specials to make you laugh, cry, and sing. What more could you ask for on Christmas? Hopefully these shows can be a reminder to take a look at the starry or snowy (but hopefully not rainy!) sky and feel the joy of the season. We’re alive at a special time, but the problem with living in a world that gives us so much is that sometimes we feel like it demands so much back. So I hope that, at least for tonight, everyone can feel that they’ve given and gotten enough!