There are spoilers ahead. If you see a show title you haven’t watched yet, you might want to skip it until you have.

The time has come to reflect back on our most questionable hobby: seasonal anime. According to my research, a lot of anime was released in 2016. Too much. My home and body fell into decay trying to keep up with it all, but I regret nothing. I lived my life as a moe-infected caveman in order to make this retrospective possible, and I’d do it again. I live for the list, you could say (the secret is to drop all the boring trash immediately).  Thus, as I finally shave, as sunlight breaks through my shades for the first time in months, let’s recap the five anime of 2016 that I am most likely to remember. The five anime that will define—for better or worse—2016 in my mind.

I’ll be applying the same rules as last year, so that means no shows continuing from cours or seasons that began in 2015 (or earlier). Additionally, I won’t be including any movies. This is primarily because I prefer/have to wait for disc releases. With all of that out of the way, here we go!

Let’s start this list off with an obvious choice: a sports anime that defied expectations both narratively and visually. 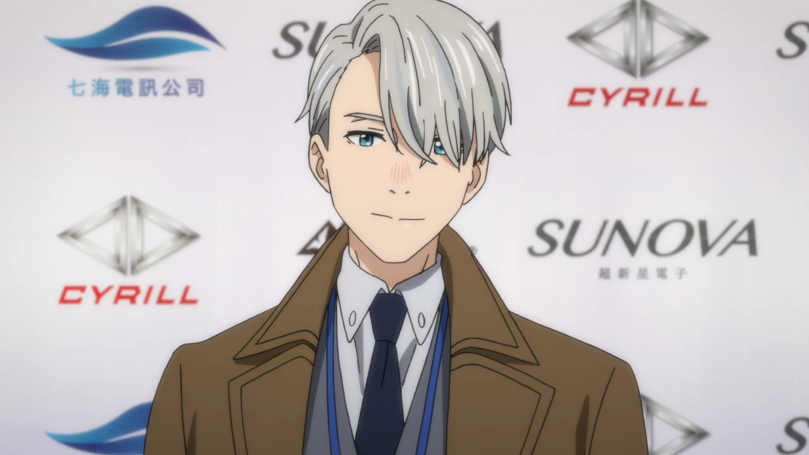 In a stroke of luck (or psychic genius?), Yuri!!! On Ice provided viewers with an openly homosexual relationship during a season when half of the other shows airing left many fans despaired at the fact the same-sex leads hadn’t kissed. While I won’t sit here and claim representation automatically makes a show good, it is certainly satisfying when two romantically-entwined characters come out with their love—regardless of sexuality. For me, Yuri!!! On Ice is the antithesis of light novel adaptations that leave romance unresolved, not the hinted yuri (the other kind) we’ve gotten so much of lately. 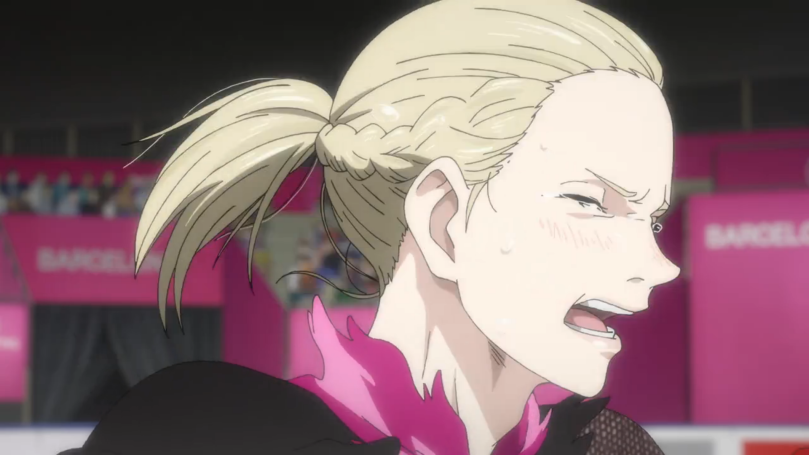 To go one step further, this romance is woven into the competition. Several of the show’s main skaters literally express various forms of love in their choreographies and on the ice in general. In this way, Yuri!!! On Ice is a celebration of the diversity of love, as it gives athletic and visual form to the feelings within each character. Every skater battles demons, confesses love, and tackles competition out on the ice. Every skater is alone and exposed and—though this is an extreme way to look at it—thrown into the lion pit. There isn’t any escape until every emotion and desire is confronted in front of the crowd (in front of the viewer), which works in stunning contrast to Yuri’s running away in the first episode. 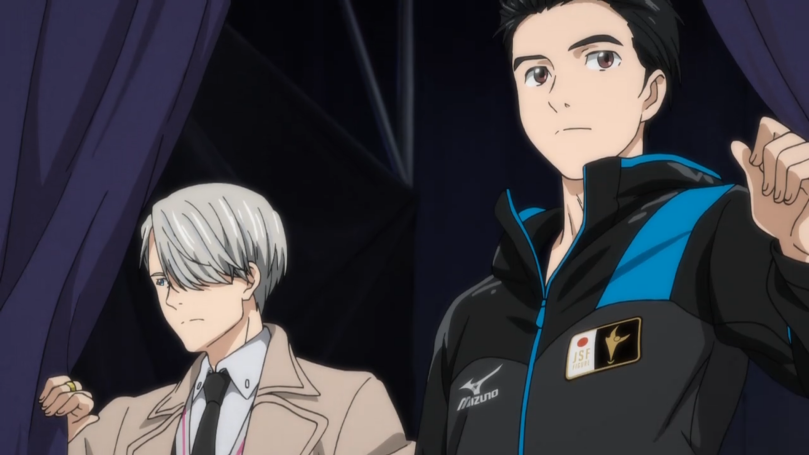 I would say that is the true beauty of the show, but I found myself even more amazed by the sheer effort the staff poured into every episode. Every time I thought, ‘They can’t possibly include that many routines again,’ I was proven wrong. Sure, skaters started slipping off-model after the first episode, and routines were cut short towards the end of the season, but consider just how much of this show’s runtime was pure skating. A lot. Fall 2016 brought us Haikyuu!!’s third season—which was 10 episodes of playing one match—yet I think Yuri!!! On Ice might have spent as much time depicting actual skating as Haikyuu!! did actual volleyball. Balancing that workload in real life is impressive enough, not to mention somehow finding the time to weave in character development and drama.

Yuri!!! On Ice is the result of undeniable hard work and dedication. Both to the project itself as well as the ideas it represents.

And naturally I have to follow up with something less predictable. Tabi Machi Late Show is a series of four 8-minute shorts that are loosely connected in that they all focus on pivotal moments in the human experience. The series isn’t fully animated, more a sequence of frames that fade in and out. This style may seem off-putting at first, but the episodes are so short and the stories so compelling that you actually come to appreciate the information underload. Admittedly, Yuu Numata (more or less the series’ grandmaster) could have given more care to how some of these shots looked since there are so few of them, but the visuals do enough to keep you immersed.

I watched this show late at night with hot chocolate, and I believe that is the ideal environment for Tabi Machi. The show always put me in a relaxed, introspective mood. While I cried, it was not the emotional upheaval you experience from drama. I think I cried because Tabi Machi made me feel like I was part of the human race. That probably sounds ridiculous—and I assure you I am 100% human—but it’s the best way I can describe my experience.

If you haven’t seen this show yet, I recommend you watch every episode regardless of whether you can relate. It’s only half an hour of your life, and I think if you ever experience the same moments or reach the same crossroads as those depicted in the show, then you will remember Tabi Machi. I think you’ll be surprised how well an 8-minute short encapsulated the unspoken subtleties of life.

If you have seen this show, I hope you understand what I mean. And I hope you enjoyed each episode as much as I did.

But forget that sappy junk, we need animated memes! Animemes!

The KonoSuba anime arrived with perfect timing—right in the middle of a seemingly endless chain of isekai light novel adaptations. What’s more, it immediately preceded Re:Zero, which wound up being a similar premise (I should say: more similar than usual), but on the opposite end of the tonal spectrum. Although I enjoyed Re:Zero far more than any of the other earnest isekai adaptations, I still noticed how much the show’s existence benefited KonoSuba. I found myself thinking how KonoSuba would have handled various situations in Re:Zero—a practice that usual led to a laugh.

But enough about other shows. KonoSuba certainly plays off its genre, but that’s not the only source of its comedy; perhaps not even the main source. Most obviously, the show is full of over-the-top dysfunctional characters. But more importantly, KonoSuba just knows how to get a laugh. RCAnime made a cool video about just that. What sounds like a gimmicky parody series actually only used its setting and genre as a backdrop. Because why not? I’d actually say KonoSuba is an imitation of Monty Python films before I call it a parody of isekai anime. Of course, KonoSuba is more its own show than a shade of something else.

I didn’t forget about you, Kiznaiver. Others have tried, but I didn’t! 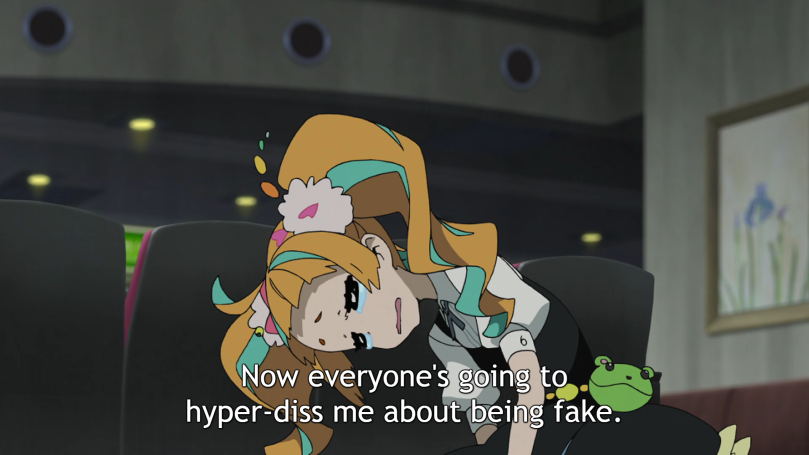 I bring a natural bias to this show due to my being a massive melodrama fan and a Mari Okada fan in general. Throw in the best character designs of 2016 and typical Triggery Triggerness, and I was destined to have a good time. This may have been the show I derived the most pleasure from just looking at this year, which is saying a lot given the quality of animation or beauty of the art in shows like Hibike! Euphonium 2, Flip Flappers, and Orange. Haha, just kidding. Not Orange.

Jokes aside, I have to admit that Kiznaiver stumbled around its ending. In an attempt to make allusions to a unified consciousness and the networked ego, the show overcomplicated what would have been an otherwise consistent message about compassion and emotion. Still, the show hits its notes effectively and manages to play with the melodramatic mode in a way only Okada can. Kiznaiver marks another solid entry into Okada’s deceptively diverse catalog (but more on that in a future essay…).

The show that somehow beat out Hibike! Euphonium 2 for my anime of the year.

It’s the show that everyone says no one is watching—how does that work exactly? And it’s on as many MAL lists as the second season of Euphonium. And it’s one of the most-written about shows of the season. And maybe generalized hyperboles about a show and its fanbase are a dishonest and problematic method of evaluation…but I digress.

This is supposed to be a critical website, right? I’ll save the rants for later. Let’s talk about why Flip Flappers makes this list. Most importantly, the show is an adventure. You go into each episode of Flip Flappers not sure of what you’re going to get. While this sounds dangerous, the show manages to consistently deliver episodes that are at once simple and challenging. The viewer can proceed through the story stress-free, or they can bash their head against understated complexities for weeks on end. Being a masochist, I chose the second option.

While frantically working on the follow-up to my original analysis of the show, I realized just how special Flip Flappers was. Honestly, the Fall 2016 season was special as a whole, but Flip Flappers stands out in its own way. I can’t write two words about the show without being impressed by the gall behind the series’ progression. Someone made the decision to start Episode 3 by fading into a Mad Max wasteland where Papika is stranded and Cocona is the leader of a bandit gang. And then they try to kill each other! That’s just what happens—that’s crazy! Nevermind all of the secrets that are hidden or revealed throughout the whole episode.

Maybe it’s because I come from a creative perspective, but I think it is so rare that you can feel a creator’s audacity—their bombastic commitment to a project—in the narrative form. In hip-hop, for example, creative audacity is the name of the game, but when does that fiery arrogance ever come through in a storytelling endeavor like anime? The closest example I can think of is Bakemonogatari/Madoka-era Shaft, or maybe Fullmetal Alchemist. Even in literature: Wilde, Pynchon perhaps, but not many others. Passion, sure. Love, sure. But unbridled, show-offy confidence? That’s special.

To be honest, I haven’t looked very far ahead as far as anime goes. 2017 should be the turning point of my own career, so I’ll really be focusing on that and just reacting to anime as they’re brought to my attention. I know I’m looking forward to KonoSuba’s return in Winter 2017, and I’m cautiously interested in Hand Shakers, since it looks like a refined K. But if you’re a seasonal watcher, then you know there are always surprises—both negative and positive.

On the content side of things, I’m hoping to expand the scope and style of what I produce. Some of those improvements will hopefully be noticeable in the next few essays I release—which are all in the works! I hinted at a few of them in this post, actually. I could rush them out, but quality is very important to me and I want to make sure my first steps in a bigger and better direction are good ones!

Thank you to anyone who has read anything I wrote this past year. I am looking forward to sharing more ideas and memories with the world over this next year. With that, see you again very soon!