While I don’t have any arguments I want to “correct” from my original analysis of Kumiko, I do have a lot to expand upon. In particular, we can take a deeper look at Kumiko’s first experience with true failure. This is the most pivotal moment for Kumiko’s development in Season 1, and Hibike puts maximum effort into growing its previously passive protagonist. Let’s take a look at all the elements that come together to create the emotional climax of Season 1.

Thus far, light has always been a motif for characters to strive after. Light is where passion and love lie and where characters move forward. We’ve always wanted characters to embrace the light. We might even assume light is purely benevolent, but this is not the case. Light is where passion lies, but—for Kumiko—that is exactly the problem. The new sequence that Taki asks the euphoniums to play is dizzyingly difficult for Kumiko, and the first challenge since her hike with Reina that she struggles to overcome. The old, detached Kumiko might avoid facing this challenge, but the Kumiko who wishes to become special must attack it head-on.

After fumbling over the sequence in front of the rest of the bass section, Kumiko goes outside to practice alone. The day is sweltering—both too hot and too bright for Kumiko to practice out of the shade. She’s literally backed into a corner, chasing whatever reprieve from the sunlight she can find. The overbearing heat of the sun resembles the difficulty of the piece she’s trying to learn, and we can feel the stress building up on her. She’s not running away from the challenge, but she also can’t fight it one-on-one/out in the open. For the first time all series, we see how the light of passion can be too intense to cope with. Our worries that Kumiko can’t overcome this challenge only grow once she gets a nosebleed from dehydration. Of course, Kumiko isn’t alone—she has Reina by her side and Hazuki and Midori as well. But, as we learned with Aoi, having support isn’t always enough. My past essays focused on pushes and support so much because (at those points in the show) that’s what characters were lacking the most. However, without the personal drive—the “reason” to continue forward—these characters cannot become special.

That being said, I lied when I said this was the first time we see how the light of passion can be too intense. Aoi also couldn’t handle the light, which is part of why she stepped away from it and quit the band. Aoi’s decision and situation mirrors Kumiko’s in several ways, as we’ll see later in this essay. To correct myself: Episode 12 is the first time we see overwhelming light from the focal point of the person overwhelmed, rather than someone outside the situation.

More on that in a second, but first: language! As during Kumiko and Reina’s hike, the word choice in the dialogue of Episode 12 reflects the challenge Kumiko faces. Kumiko says her desire to improve is “feverish”—hot, dizzying, overwhelming. That’s a leap from what Hazuki describes as Kumiko’s old, “cool” personality. Her new and “intense” focus matches the heat of the day and the bright light she needs to face. In order to satisfy her “feverish desire,” Kumiko has to endure the blazing light. But if not by the support of her friends, how can she march forward?

By no accident, Kumiko meets Aoi at night under the light of a streetlamp. As I mentioned, Aoi lacked any “reason” for continuing on with concert band, exemplified by her once again stepping out from under the streetlamp to look for something she can be passionate about. Kumiko reflects on Aoi’s lack of a reason, comparing it to her own sister, who took a similar path of quitting band to study. I think there’s some interesting ‘teenage conflict’ here regarding the balance of traditional endeavors like studying for college versus artistic/creative endeavors like music, but this isn’t the essay for that.

What matters is that this all poses a question to Kumiko: does she have a reason to continue to work so hard at something other people view as a simple hobby? Kumiko finds that her answer is a defiant ‘yes!’ and so she plays her euphonium obnoxiously, but she hasn’t yet realized what exactly that reason is. It’s just her instinct to continue forward. It’s a Romantic decision made purely on an emotional response. 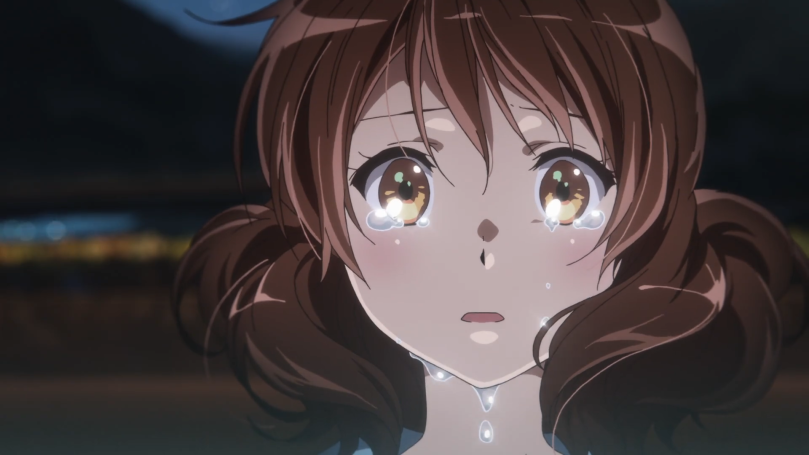 It’s not until Kumiko actually fails that she realizes what that reason is. Although Hazuki noticed Kumiko’s newfound intensity, Kumiko’s distance still hasn’t faded entirely. She still hasn’t fully accepted her emotions. This all changes during the gorgeous running scene, when she finally cries and shouts out her frustrations, similarly to Reina earlier in the season. The pressure of improving cracked Kumiko’s ability to perform in band, but it also cracked her emotional shell. Her feelings are suddenly immediate and unavoidable. She realizes the pain that Reina felt in middle school, as well as her reason for continuing down the painful path. Faced with a seemingly insurmountable wall, Kumiko is forced to truly think about her reason for playing the euphonium.

And she finds her reason. Kumiko loves the euphonium. Well, she only says she “likes” it, but I think it’s fair to call it love. Kumiko’s sister poses the question from earlier directly to Kumiko: “What’s the point of continuing concert band?” Kumiko can now put her answer into words, so she proudly stands up to her sister and declares her love for the euphonium.

This answer is more specific than “yes, there’s a point,” and it’s more concrete than “I want to become special,” but is it really enough to keep Kumiko going? According to Taki, it is. Kumiko asks Taki about the “pressure” he felt from doing the same job as his famous father. His answer reflects Kumiko’s experiences throughout the past 12 episodes. In the beginning, he “never even wanted” to do this job, but “it was the job [he] chose.” Kumiko, too, never really wanted to play the euphonium, but she wound up on it. Taki continues by saying the pressure never got to him and that he must’ve wound up doing this job because it was something he liked—even if he didn’t realize it at first. Kumiko has just undergone the same realization about playing euphonium, so she responds by saying “you really only need to like something” to pursue it, regardless of any pressure.

The very next shot is of Kumiko smiling because she’s found her reason to continue down the painful path. Kumiko tells us that the gods don’t always “smile on those who make an effort,” but “the god of destiny gave [her] a wink” that night. Taki is such a mysterious figure that it’s hard to say whether he always planned to tell Kumiko to continue practicing, but he plays the role of the god of destiny regardless. Indeed, his face is lit up like a god or angel as he tells Kumiko he hasn’t forgotten her promise. Compared to the sunlight from earlier, this light is much softer and more welcoming. Through a lot of pain, a bit of crying, and a wink, Kumiko has found her reason for playing the euphonium and therefore a way to not collapse under the pressure of failure. She loves the euphonium—a truth that she’s put off for so long that it changes her entire attitude once she realizes it. Kumiko from now on is much less a spectator and much more an energetic, passionate girl. That is to say, she’s much more herself now. We can already see the true Kumiko when she meets up with Reina at the end of the episode. She eagerly calls up Reina and starts to tell her about what happened, only to get excited over the new eupho-kun mascot a moment later. We’ve never seen a Kumiko like this—one who chases after her emotions and instincts wholeheartedly.

There’s a lot more to be analyzed concerning light throughout the episode, as well as some neat butterfly imagery, but I won’t flood this essay with all that. I think it’s enough to say that we move into Episode 13 with a brand new Kumiko and a brand new Reina, both of whom have undergone a stunning metamorphosis. As for what that episode (and the end of our journey) holds, that’ll have to wait until the next piece begins.