In my character analysis of Reina, I painted her as an actively manipulative person. While I don’t believe that analysis is entirely wrong, I do think it is an unfair interpretation that misses out on a few key details of her character. These misinterpretations are centered around Episode 11, so this is the perfect opportunity to revise some arguments made in that original essay. This essay (combined with the original character analysis) will provide a much more accurate and nuanced understanding of Reina. Or so I hope. Rather than actively manipulating Kumiko for self-satisfaction, Reina is seeking support without the emotional toolkit to effectively do so. In the previous episode, Reina declares she’d “double down” on her trumpet solo. She absolutely won’t give up what she worked so hard for, regardless of what she has to endure. But if she declares her determination so clearly, then why does she show moments of insecurity to Kumiko—her letting it slip that Kaori being a “good person” makes taking the solo “a bit hard”, for example? Reina gives us a hint on the night of the festival: she doesn’t get close to most people. She builds walls around herself. 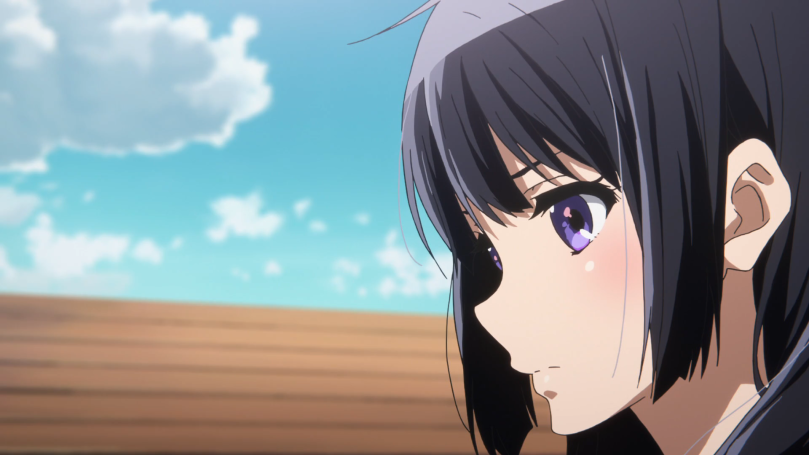 My original analysis focused on the idea that Reina wants to pull Kumiko towards being special with her, hoisting her over Reina’s walls. I think this is still true, but not in any sort of ‘I know how to convince Kumiko’ way. Naturally, Reina doesn’t want to be alone. She feels a connection to Kumiko and—while in their crafted atmosphere I mentioned in Episode 8—she can let down her walls. Instead of pulling Kumiko along, Reina wants to hold hands and walk together.

We see Reina’s walls best when Yuko begs Reina to throw the re-audition. Reina will endure anything to become special, so she rejects Yuko and commits to chasing her goals. Yet, that doesn’t mean Reina’s path is suddenly painless. Reina’s determination is so important precisely because she will be asked to endure this much. The emotional toll that Yuko’s begging (and Kaori’s good nature and effort) have on Reina is evident in her voice when responding to Yuko. Although she yells that Kaori’s past “doesn’t matter to [her] at all,” her voice spirals out of control for perhaps the first time all season. When Yuko bows to beg once more, Reina can’t handle it and has to leave the room. The thought of being a villain scares her.

This is also the first time we ever see Reina run away from her feelings. In the past, she publicly defended Taki to Shuichi and Kumiko, apologized to Kumiko for her words, yelled out her frustrations, etc. But now she just has to get away. Despite coming to Kumiko’s aid a couple of episodes ago, Reina can’t seek out the same support for herself and winds up sitting off alone before the audition. Due to her social inexperience (and perhaps a bit of ego), she doesn’t think to look for help. Luckily, Kumiko decides to return Reina’s gesture from Episode 9, and comes to reinvigorate Reina. 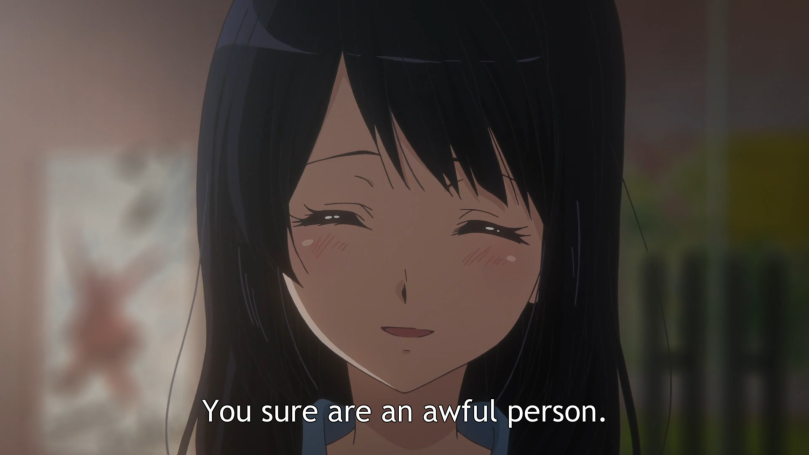 Although Reina certainly acts with a bit of self-pity before the audition, that insecurity feels more subconscious/natural than planned. This is not a girl who’s looking for self-satisfaction by hearing her friend tell her how she’d die for her, this is just a girl who needs help and doesn’t know how to ask for it. In fact, Reina seems almost childlike during her conversation with Kumiko before the audition. She quickly and seriously asks if Kumiko would “really” tell everyone that Reina should play the solo. It’s an immature moment for Reina, like a five-year-old looking for a concrete answer for a random hypothetical. Once Kumiko backs off a bit with a “probably”, Reina realizes how silly she’s being and how earnest her friend is and can’t help but laugh. 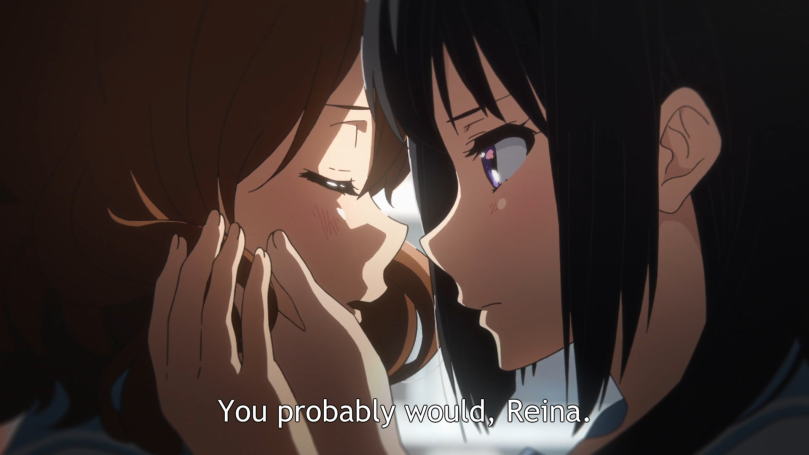 That laugh is the moment where Reina feels the support she was looking for. She picks herself up out of her insecurity, and the duo’s conversation regains that level, open atmosphere that it had during their hike. Reina and Kumiko challenge each other once more and Kumiko—now in a position like Reina was during the hike—returns the “confession of love.” With that, Reina can once again declare her determination without fear. She’s been pushed past her reservations by Kumiko. As long as she holds Kumiko’s hand (so to speak), she can handle being a villain. 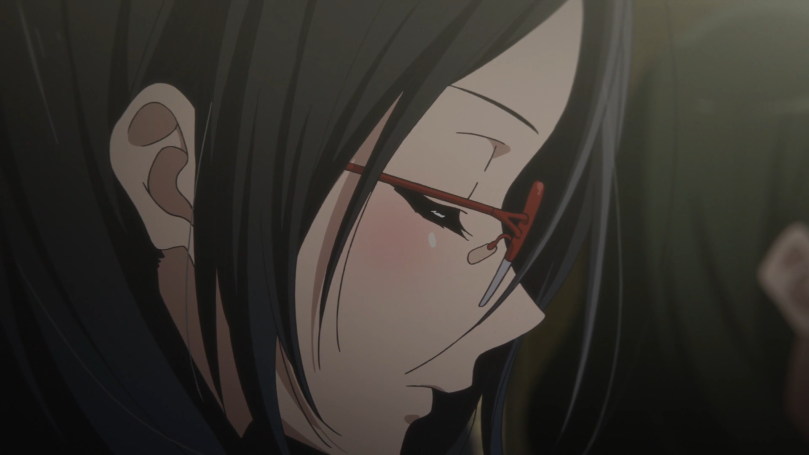 Side note: After watching this episode a few times, I have a lot of ideas to write about Asuka. Expect a full-length character analysis of her as soon as Season 2 ends!