In my character analysis of Reina, I spent a few paragraphs dissecting lighting in the moments before the audition for the trumpet solo. I explained light as representative of “being special”, which is admittedly a simplification of the truth, and relies on an understanding that Reina views band as a path towards specialness. In this essay, I’d like to begin to refine that idea, focusing primarily on Aoi and her decisions in Episode 7. We’ll revisit some concepts we establish this week in future essays with the assistance of other characters. Therefore: what does light mean in Hibike Euphonium?

Hidden beneath the surface of that first question is a second one: what does lighting accomplish in Episode 7? We interpret symbols and motifs by assigning meaning to them (answering Question #1), but that meaning is meaningless without effect (what we look for in Question #2). If a symbol can’t be logically connected to a consistent idea throughout the story, or if a symbol connects to an idea irrelevant to the story, then it enhances nothing for the audience (regardless of whether the audience is viewing for entertainment or analysis). In rough analogy: if the hammer strikes the nail at random angles, or doesn’t strike the nail at all, why bother with the hammer? Hibike hits the nail dead-on. The atmosphere of the show takes a sudden nose-dive in Episode 7. Episode 6 was filled with warm colors and dreamy lighting, with the “Twinkle, Twinkle Little Star” scene serving as a perfect example. Yet, Episode 7 is cold, dreary, and wet. Very dreary and very wet. A storm seems to hang overhead at all times and when it starts to rain, it feels as though it’ll never stop. This quite literally puts a damper on comradery of episodes past. This episode marks a shift in tone—from slice-of-life adventures to identity-branding drama—so a change in atmosphere is fitting. Although some of the show’s greatest drama comes after the students switch to their brightly-colored summer uniforms, Hibike benefits from shifting the tone while the winter uniforms are still required. The earthly colors help maximize the darkness of the episode.

Anyway, it’s really dark in Episode 7. We instinctually know that this will not be a happy episode. While that’s some solid, functional directing, that’s just the backdrop used to enhance the effects of what light does show up. Light obviously contrasts with darkness. By following Aoi through this depressing atmosphere, we can learn what lighting accomplishes and, subsequently, what light means. While walking home from cram school, Aoi pauses momentarily to look at a poster for the regional concert band competition. Rain is falling and night has taken over, so the light from the store window that the poster is taped to stands out. Aoi looks towards the light for a moment, but soon walks back into the rain. The implications of this are clear, and made even clearer by Kumiko’s narration. Kumiko wishes Aoi won’t quit, but as Aoi walks away from the poster, Kumiko ends her thoughts with “But…the next morning, it happened abruptly.” This narration transitions into Aoi actually quitting band. The band room is just as dark as the day before, with the overhead lights doing little to help. When Taki begins to ask Aoi when she’ll be prepared to play the piece well, we’re shown a shot of Aoi’s saxophone. Her sax is the one object in the whole room lit up at all. It shines brightly and we can even see her face in it, borrowing from the Romanticism we discussed earlier. Aoi’s face, however, is still dark. She looks down at her instrument and Taki tells her no one can perform well without practicing hard. Aoi makes her choice to quit band and pursue her studies instead. Well, that’s her preferred excuse. We find out that Aoi doesn’t feel she can chase after a grand goal like Nationals because she failed to keep the hard-working first years of last schoolyear from quitting. She feels some responsibility for what those first years missed out on and how they were treated for taking band seriously. If we look back to the end of Episode 6, Aoi calls Kumiko “lucky” for being able to wholeheartedly practice for the auditions. Aoi can’t put her heart into band, perhaps out of a sense of guilt, or because she feels she gave up her chance to take band seriously. Whatever the reasoning, Aoi doesn’t believe she belongs alongside those who are trying to become special or realize their dreams.

In that, we can see that light is connected to specialness and dreams/goals—more accurately, light is connected to passion. Aoi doesn’t feel she can be “serious” or passionate about band. The poster for the competition is lit up, her instrument is lit up, and elsewhere throughout the show everything related to the painful and passionate pursuit of specialness is lit up. Cliché as it is, the fires of passion light up these objects. That’s not to say that studying for college is dull or passionless or not a path towards specialness, but just that Aoi doesn’t feel that passion towards her studies. She doesn’t have some career goal she wants to chase, and she never mentions a specific school she wants to be admitted to. Studying isn’t her real reason for quitting, after all. She declines the offer to sit out of competition because she simply doesn’t feel she belongs in this passionate band any longer. During her conversation with Haruka, Aoi momentarily stands in the light passing through the hallway windows. This is her last chance to chase after that light and to decide to act with passion. Of course, she finalizes her decision to quit by turning away from the light and walking away from the windows. What Aoi feels about last year mirrors what Haruka currently feels. Haruka couldn’t keep Aoi from quitting and giving up on music, so shadows soon cover her as well. Actually, I should say Haruka hides from the light. She skips school the next day—a day that happens to be rainier and darker than all the rest—and just stares at the light through her window. She feels much of the same doubt and guilt Aoi feels, though in the capacity of club president rather than simply an upperclassman. After talking with Kaori, who convinces Haruka that she’s done well as president, Haruka returns to school. Haruka fails to bring Aoi back with her, yet the day is sunny once again. Kumiko mentions how the band is now off to a “new start” on this bright day. Because of Haruka, we really can’t say that light represents such a strict idea as “being special”. That’s convenient to say, and is all that needs to be said in the context of analyzing Reina or Kumiko, but doesn’t cover the show as a whole. Rewinding from “light is passion”, we can say light is music (or is related to music). Like I said, the instruments glow all the time, Reina’s trumpet constantly brings flashes of white light on the screen, and so on. Even the language in Hibike connects light to music. Most noticeably, the marching band showcase is titled an in-your-face “Sunrise Festival”. If we consider what music means in the storyworld of Hibike, then we can universalize this connection to get the aforementioned “light is passion” motif. The story focuses on concert band, all of the characters are musicians, and the main goal of the plot is to reach the National competition. It’s really kind of a given that music is equal to passion in this narrative space.

All that being said, did we answer our two questions? 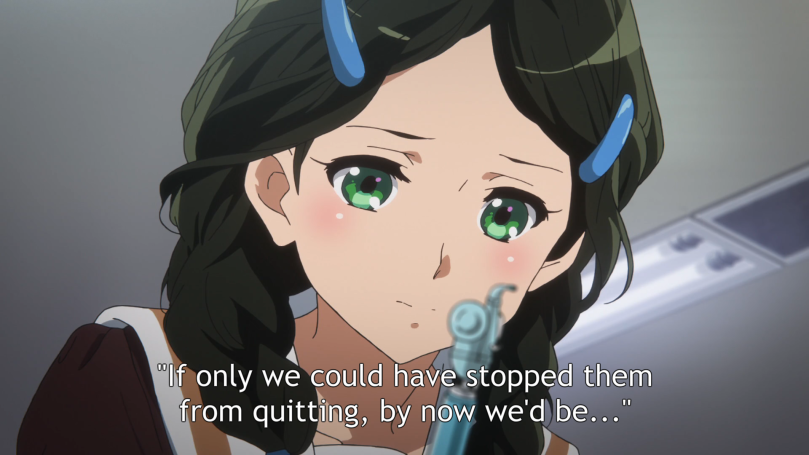 The change in lighting marked a dramatic shift in tone for the series. The contrast between the dark atmosphere of Episode 7 and the various lights (Aoi’s saxophone as the best example) caused those lights to stand out as mystical beacons. Hibike plants in us a desire to shed the dreary atmosphere in favor of those beacons, thus delivering a message about the passionate pursuit of music as it relates to the characters. From there, we can ask ourselves a third question: what does that message say about us and the world we live in?

Yet, that’s a question for when the next piece begins.