The Sub’s Sub-Thread (A Haikyuu!! Analysis)

I’ll admit it, I’m obsessed with Haikyuu!!. Just when I think I want to take a break from writing about this show, it pulls me back. With the ridiculous number of interesting characters in this series, and the brilliance with which they’re all developed, I guess I shouldn’t be surprised. Ennoshita’s true arrival as a character over the past two episodes is just the latest in a long list of spectacular storylines. So, with an elimination match and an opponent’s development to boot, let’s figure out how Haikyuu!! gets us invested in the “don of the second-years”. 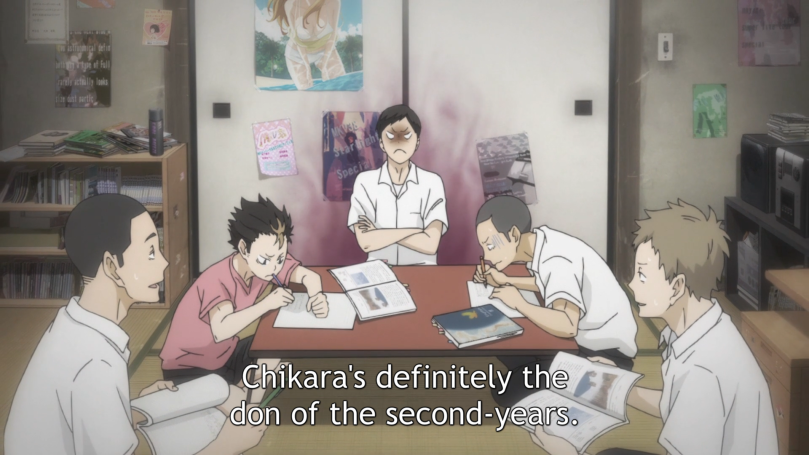 To start, let’s just briefly mention that we meet Ennoshita way back in Season 1, and we do get to see and hear him a few times throughout the series—to the point we have a general idea of his personality. However, not until Episode 17 of the second season do we discover his history as a volleyball player. The reason injecting Ennoshita’s backstory into the middle of a match works so well is because of a theme that ties both the backstory and the match together. Ennoshita is very concerned with whether he’ll “run away” or not. We learn that, in the past, he ran from Ukai’s harsh training, skipping practices to the point of basically quitting the team. Essentially, what Ennoshita is running from is the pain suffered and the risks involved in being great. That very greatness is what the other second-years are expecting from him once the third-years leave. Ennoshita is everyone’s choice for the next captain, a position he’s already scared he might run away from. This theme pairs perfectly with Yamaguchi’s serves later in the match. Yamaguchi is a prime example of someone who runs away when he has his chance on the court; he shies away from his jump-floater serve in preference of the safe option. This comparison brings Ennoshita’s backstory to life on the court, instead of leaving it as a disembodied flashback that lazily serves to make Ennoshita seem important. Ennoshita’s struggle becomes immediately important because it’s related to Yamaguchi’s struggle we’re currently witnessing. When Yamaguchi can’t move to receive an attack, Ennoshita jumps out to cover for him. Because these two characters work as each other’s foil, the past is connected with the present. 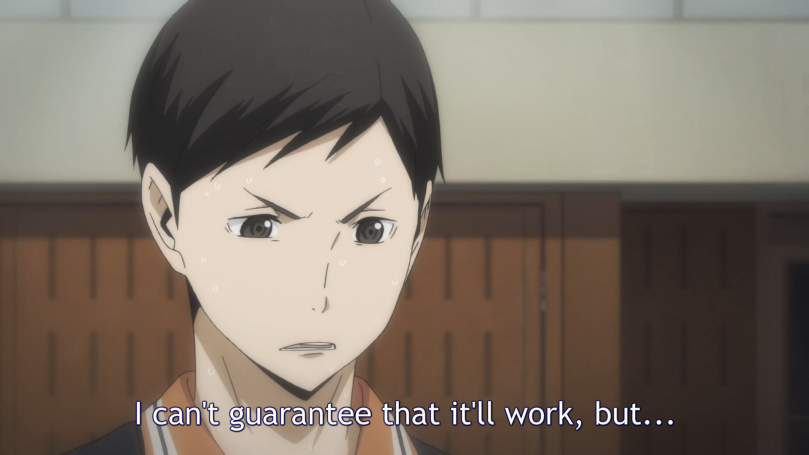 Naturally, if the reason Ennoshita is subbed in also relates to that theme, then our investment in him only grows stronger. He is literally taking Daichi’s place in the match as captain, a taste of what he’s expected to do in the future. Our understanding of Daichi as a captain serves to ground us despite a less-developed character like Ennoshita stepping in. Throughout the match, Ennoshita compares himself to Daichi, and other characters joke about how he shouldn’t try to “pull the same moves as Daichi”. We watch him think up strategies on the fly and encourage his teammates—both actions we recognize as traits of Daichi. Again, this is a comparative development, very much piggy-backing of the established character of Daichi (in a good way).

Even more important than Ennoshita’s development during the match is the continuation of his story threads after the match. His connections to Daichi and Yamaguchi and his struggle with running away are not abandoned once the whistle blows. Daichi more or less gives Ennoshita his blessing, saying he adequately filled Daichi’s shoes. Immediately after, Ennoshita goes to the bathroom to confront his thoughts. He damns himself for relaxing now that Daichi is back, viewing it as himself running away yet again. He can’t stand to lose the courage he had on the court just because the true captain has returned. Yamaguchi, too, rushes to the bathroom, presumably to chastise himself for not having the courage Ennoshita did. This post-match drama makes us feel like Ennoshita’s sudden development wasn’t shoehorned in at all. Everything we’ve witnessed feels serious, vital to the team’s progress, and directly involved with the present action. This isn’t the first time Haikyuu!! has employed this sort of on-the-fly development. In Season 1, Kageyama is subbed out for Sugawara, and the show acquaints us with Sugawara via a comparison to Kageyama. The development for the more minor characters is directly related to the dilemma they’re brought in to solve (Daichi’s injury or Kageyama’s loss of control). The matches are sometimes defined by the sub-themes used to develop minor characters (what it takes to be a captain, what makes a great setter, etc.).

This is just one of the series’ many narrative tricks, but it’s one of my favorites. Match after match, I’m still surprised by just how much I end up caring about the opposing team or a minor character. The next time you cry over a character you’ve just met, see if you can find the threads that wove them into the story.

2 thoughts on “The Sub’s Sub-Thread”