As I began writing a character analysis of Saori Chiba from Hourou Musuko, I realized I couldn’t say all I needed to say without first establishing the nature of identity in this show. Obviously, a story that deals heavily with gender and sexuality also has to grapple with identity. That being said, we won’t be looking at identity strictly through the lens of gender issues. We’re going to investigate a more universal idea of identity—applicable to any scenario and any perspective. Whether or not gender and sexuality are things we should include when we think about what a ‘personal identity’ consists of is a discussion for another time. We won’t be investigating what attributes are included in Hourou Musuko’s concept of identity, we’ll be figuring out what factors influence the formation of personal identity. The topic isn’t what identity is, but rather how is identity formed (and the show’s opinion of those influencing factors). 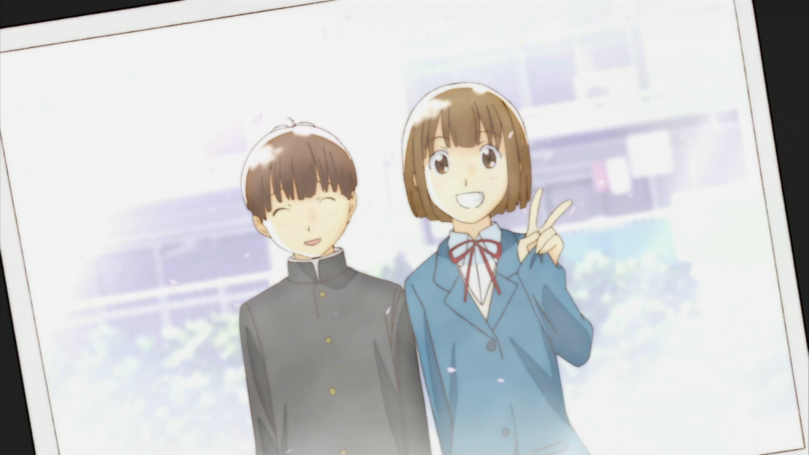 Immediately, this topic gets complicated. Identity, gender, sexuality, emotions, relationships, and just about every other abstract noun in Hourou Musuko are all fluid. This is most obvious in the character designs, as most children in the show could pass for boy or girl—to the point I had a tough time remembering who was who for the first few episodes. Depending on hairstyle and camera angle, Maho and Shuichi are identical. This is an intentional aesthetic choice to blur the line between a boy and a girl, and puts us in the mindset that identity isn’t something fixed in one place.

Interpersonal states are as fluid as personal states, best exemplified by Shuichi’s relationships with Anna, Yoshino, and Doi. I could write analyses on each of those relationships, but I’ll keep it short. Despite officially breaking up with Anna, Shuichi continues to love her, and she appears to still love him. Breaking up in name isn’t a nail in the coffin, and Anna eventually reveals she only dumped Shuichi because of her fear and “confusion” about the future. Yoshino is a similar case, where the feelings between her and Shuichi are difficult to pin down with words. They clearly have a special relationship, but whether their feelings for each other are romantic love, or a supportive love, or something else entirely is really impossible to understand. With Doi, it’s difficult to tell when he’s being malicious versus honest, as Shuichi himself points out. Although Shuichi declares he “hates” Doi, he is still able to rely on Doi for help with the play, and Doi is willing to encourage and assist Shuichi. Really, it’s because of Doi that Shuichi returns to class.

That wound up being longer than I hoped, but the point is: we can’t just draw up lines and segregate these abstract states of identity/relationships/etc. That’s fine, but characters still need to form some sort of identity, even if it can’t be strictly defined. No one wants to fade into an ocean of LCL, if you know what I mean. Fluid as identity may be, it still has to be shaped by something.

Chizuru winds up being extremely useful in this discussion. She’s the character who’s most secure in her own identity, and becomes something of a reference point for other characters. Chizuru is brazen, but that’s not to say that you can only be secure in your identity if you’re loud and bold—she just happens to be, and thus naturally finds confidence in who she is. She’s able to declare who she is whenever she speaks by referring to herself in third person. Despite speaking as if “Chi” is a separate entity from herself, Chizuru is actually fully aware of who she (Chi) is. When you’re certain of what a dog is, you can shout, ‘A dog has two ears!’ It’s so obvious to you that you don’t doubt yourself. Likewise, Chizuru knows herself: “Chi’s a real fighter!”

So, if the other characters aren’t as confident in their identities, there must be a reason for that. Those reasons are what Hourou Musuko believes shape and challenge identity. Self (beliefs of self, opinions of self, desires for self) is a centering force. Environment (other’s opinions, other’s expectations, natural forces) is a pushing or pulling force. Imagine a magnetic hockey puck in an ice rink—that’s identity. A magnetic circle at the center of the rink is self, and numerous other circles throughout the rink are environment. All these circles move around fluidly (as we established) and influence the position of the puck. Whenever the puck is inside the circle of self, a person can feel secure in their identity.

That’s not to say you want your puck inside that circle at all costs. If a negative environmental force (other’s opinions that you’re worthless, for example) is pulling your puck away, then adjusting your circle of self to match the opinion that you’re worthless would not be a healthy thing to do. Rather, you’d want to strengthen the circle of self and weaken the negative circles of environment. That’s the philosophy Hourou Musuko follows, anyway. This is all rather theoretical, so let’s put it into practice by taking a look at Shuichi. His circle of self believes he’s better suited to be a girl than a boy, and desires to be a girl instead of a boy. Again, we’re not going to complicate the issue of gender any more than we need to, so let’s just take that at face value. Anyway, when other characters call him “cute” or claim he “looks just like a girl”, that’s all validating for Shuichi. These are environmental forces that push his identity towards who he believes himself to be. Of course, when he truly exposes who he believes himself to be, those opinions turn on him and label him a freak. Shuichi’s identity is thrashed around, and he’s left questioning whether he misunderstood everyone, whether he’s ‘right’ or ‘wrong’.

As I said, Hourou Musuko believes that true identity resides primarily in the circle of self. It’s by reaffirming his beliefs and rejecting the labels forced upon him that Shuichi finds security in his identity. “Never again will I dress like a girl so people can make fun of me!” he declares. The reflections that precede this—Chizuru saying she can’t make Shuichi’s decision for him and Yuki recounting how her classmates did force their decision upon her—are meant to contrast one another and to lead Shuichi to decide for himself who he will be.

Not to make this analogy any more complex, but there’s a difference between circles of environment that push our identity in the direction of our circle of self, and those that push our identity to our circle of self. His classmates saying Shuichi looks like a girl appears to be in line with his perception of self, but that’s not an affirmation of his perception of self. They don’t say that because they understand Shuichi; they say that because they don’t understand him. The ‘why’—the motivation behind these different forces—is what matters in constructing identity. That’s the difference between Shuichi wearing a skirt for someone else’s amusement versus wearing one because it’s what Shuichi wants to do. To see this in practice, we need only look at two mirror scenes. First, when Shuichi goes to Saori’s house to work on the play, she badgers him to try on different dresses for her. ‘For her’ is the important part here. Later, Saori invites Shuichi and Yoshino over and Shuichi does end up trying on dresses—not because anyone pressured/tricked him into it, but because it was something he wanted to do.

Hourou Musuko tells us there’s a difference between someone encouraging us to align with their perception of our identity and someone encouraging us to align with our own perception of our identity. More than that, it tells us we need not be defined by the world’s definition of us. More than even that, it tells us we need only be defined by what we decide for ourselves. So when Shuichi thinks of what to wish for in the final episode, he doesn’t wish for his body to stop changing and he doesn’t wish to become a girl so the world will view him the way he views himself. He wishes to do what he wants to do with as much bravery as possible. That is, he wishes to be himself.

One thought on “Wandering Identity”