As we’ve seen in Hibike! Euphonium, dialogue can reveal aspects of character, and, as in Owarimonogatari, dialogue can also be a tool to develop theme. Like every other component of anime (and stories in general), dialogue has endless uses. Sometimes, what’s most interesting about dialogue isn’t how much it reveals, but rather how much it sends our minds spinning. A single sentence can leave us full of questions as we hang in suspense. Let’s figure out how Erased’s dialogue leaves us searching for answers. 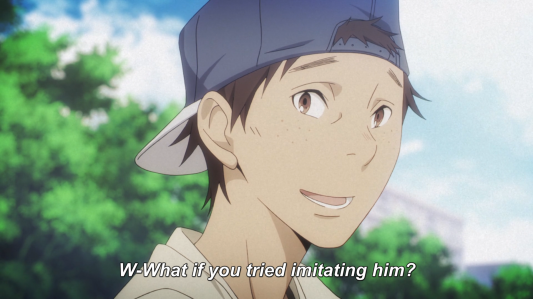 I wondered about the hidden meaning of Yuuki’s words. It seemed to me that Yuuki was an unpopular kid in school—probably very much so. Perhaps he talked with Satoru because he was trying to be courageous and act like that popular kid in some way. His constant talk of “courage” was meant to remind himself to be brave. Whatever happened in Yuuki’s past—bullying, social isolation, etc.—left him anxious to the point he couldn’t be courageous and strike conversation with people his own age. Perhaps Yuuki meant to make up for his lost childhood. Talking to a kid and trying to relate to that kid was as courageous as Yuuki could be. At least, these were the theories that ran through my head.

I asked myself endless questions about Yuuki, all because of a few lines of dialogue. I felt a little gypped when Satoru revealed that Yuuki was convicted of the kidnappings of the past, but once Satoru’s mother hinted that Yuuki might have been wrongfully convicted, all those questions came flooding back. Yuuki became instantly enthralling as a character. I need to hear what else he said to a younger Satoru. I need to understand Yuuki’s past better. I need answers because what Yuuki said wasn’t simple. They weren’t words that info-dumped exposition, and they weren’t words that moved the plot along. They were words that said, ‘There’s something more here, but you can’t know what yet.’

However, dialogue can hide meaning from us in more ways than one. Sometimes the way a line is delivered creates suspense itself. Airi’s line “his eyes opened” overlaps onto Satoru’s dream state, taking the place of Hinazuki’s voice. This seems like an editing trick to signal that Satoru is about to wake up, but, of course, I’ll try to convince you it isn’t that simple. Remember that Satoru has forgotten most of what occurred in regards to the kidnappings of the past. His mother tried to erase those memories, and Satoru closed his eyes to the truth in the process. 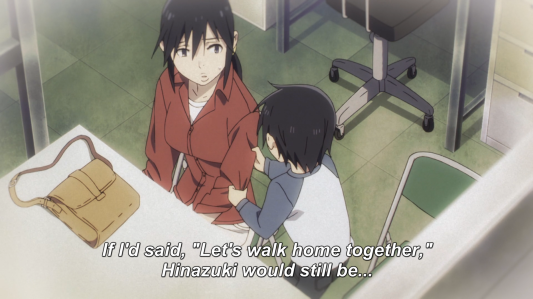 This dialogue is a signal that Satoru is about to awake literally and figuratively. He’s about to open his eyes and look at the past, remembering how he didn’t speak up when he saw Hinazuki. He looks at the past so directly that he winds up there on account of the Revival. However, if ‘opening his eyes’ was as simple as asking Hinazuki to walk home with him, we wouldn’t have much of a series. We’re made to wonder what truths are left hidden, and what development Satoru must undergo to reach “the heart of [his] mind.” The episode doesn’t begin with that monologue for nothing. 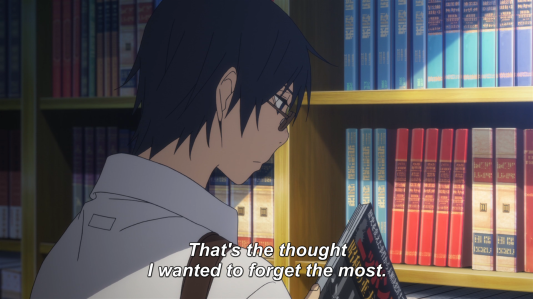 All that being said, I haven’t read the manga and plan to watch the anime with all intended suspense. If my speculations are wild, then I’d rather be wrong than spoiled. After all, the point of suspenseful questions is to be unsure of your predicted answer.