While Isshuukan Friends did have its issues—primarily a wimp protagonist and lack of romantic resolution—it makes up for those issues with fantastic atmosphere and moments of stellar directing/editing. Shougo also saves the day on an almost episodic basis, showing that the writers were at least aware of what they were doing to us. It’s a little like they wanted to punch us in the face, but were at least kind enough to bring us an icepack afterwards. For the sake of time, let’s blame it on the manga artist and move on.

In this essay, let’s figure out how smart directing can turn a small conflict into a powerful drama. If you’re interested in atmosphere—don’t worry, I have an essay on that coming as well. Now, prepare yourself for a lot of pictures. At the beginning of Episode 4, Hase is insecure as usual, and is struggling to express himself to Kaori (as usual). A rift is about to slash through their friendship, just as the cloud streak and bar of the fence slice between them visually. These characters are very clearly about to have an issue with each other.

This is more symbolism than anything, but this episode throws way too many dandelions in our face to not mention it now: dandelions symbolize friendship in this show, specifically the kind of fleeting friendship Kaori experiences because of her memory loss. The dandelion seeds drift away as easily as her friendships might if she doesn’t work hard to maintain them. Obviously, the two dandelions in this shot represent Kaori and Hase. Actually, this will be super important in a second, so remember it and keep an eye out for dandelions!

When Hase talks about the seal in the river, we view said river through the chain link fence, as if it’s somewhere these characters can’t reach—something behind a cage. As Kaori informs us, she doesn’t pass the river on her way home, and doesn’t feel she can walk there with just Hase. They really can’t reach the river together. 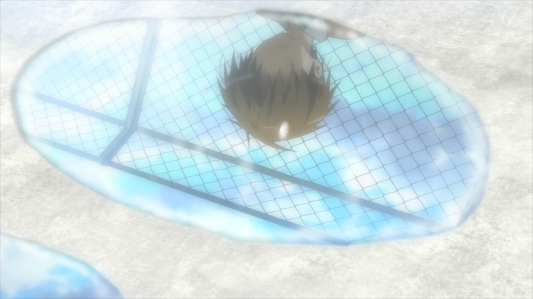 A dandelion seed falls into a puddle that reflects Hase’s hidden face. What a shot! As we know, the dandelion seeds are essentially Kaori’s memories of her friends, and this one has fallen into some water—not on the flower and not flying through the air either, simply stuck on the ground. This is some brilliant foreshadowing. Hase’s missing or hidden face will become something of a motif soon, so more on that in a moment.

Beyond just cool symbolism or foreshadowing, these shots convey a lot of emotion. In addition to his reactions and tone of voice when Kaori talks about Shougo, these shots tell us Hase is uncomfortable and stuck in his head. He won’t look at Kaori, and the reflection shot clues us in that he’s thinking inwardly. The sharply angled shots of Hase from above and below set the viewer off-balance further forcing us to acknowledge that Hase does not feel good about this conversation.

Anyway, Kaori runs off, but to where? The answer is kind of obvious if we take a close look at the screen. She passes a stream first. 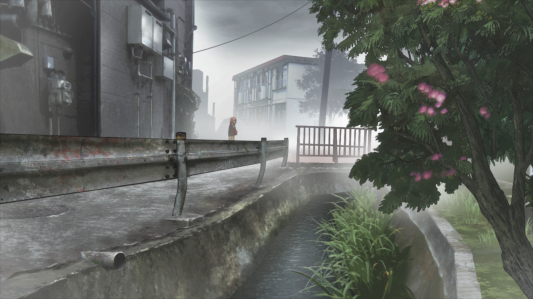 Then a small river. 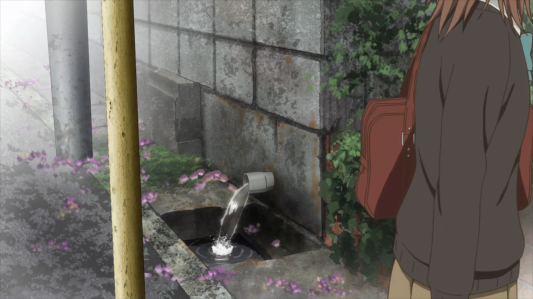 And finally this drainage pipe.

She asks herself why she wound up at the river—it’s because the director made you walk past all that running water, Kaori. Well, I guess there was some plot stuff that needed to happen about losing her diary on the ground by the river (kind of like how that friendship dandelion got stuck in the water on the roof), but I’m sure that’s not important. And maybe the conversation with Hase about visiting the river had something to do with it, too.

Unfunny sarcasm aside—yes, that dandelion on the roof matches the memories left in Kaori’s lost diary and, yes, all that running water was some more foreshadowing. Don’t let my jokes take away from how smart that sequence was. Think about this as a director: you have to show Kaori walking to the river, and you have a few ways to go about it. Instead of any boring way, or any overdramatic way, why not tease the viewer’s brain with some foreshadowing and set up some powerful symbolism?

That sounded like a closing statement on my part, but we’re not done yet! Let’s get back into it. Kaori’s bedpost looks like a heart that’s been cut in half by the middle bar. That, combined with the twisted angle of the shot, writes out how she feels in bold letters. Hase’s insecurity led to poor communication between Kaori and him, and he didn’t make an attempt to understand how she may feel to finally be gaining friends despite her memory. It must rip her heart to have her dearest friend, Hase, upset over her making more friends, which is her ultimate happiness. She hints to this on the roof, and Hase appears to realize his mistake afterwards.

When the two meet again the following week, some more angles are used for similar effects as before, but I won’t ramble. What matters most is the difference between the reflections in Hase’s eyes versus Kaori’s eyes. When Hase looks at Kaori, her whole face is reflected, but Hase’s face is hidden in the reflection in Kaori’s eyes.

Not only do we ascertain she doesn’t remember him, but we get to feel that she doesn’t remember him. Humans need faces to identify other humans, and that goes for characters, too. A faceless Hase feels strange to us even though we have enough context to understand it’s him. The quick cut between the two reflections is simply smart editing. 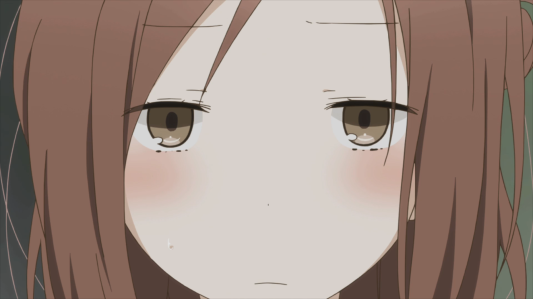 I’m giving a lot of credit to the director and editor for making this episode so impactful, but the animators deserve just as much recognition. Kaori’s facial expressions during the roof scene are so emotional, and the coldness of her face when she doesn’t recognize Hase just hurts my heart. The one-two punch of an intelligent director leading some talented animators is brutal.

Unfortunately, all the love poured into the creation of this show doesn’t result in a confession between Hase and Kaori. It’s like I said at the beginning, Isshuukan Friends is far from perfect. Yet, it’s a show directed with loving diligence. Hopefully you came to appreciate something new about this show after reading this far. Hopefully you won’t forget on Monday how tiny details of directing can create such powerful scenes.

Hopefully Hase and Kaori kiss in some untold story universe. I can only pray.

3 thoughts on “Directing the Heart”