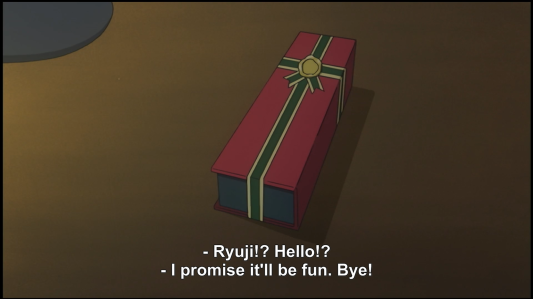 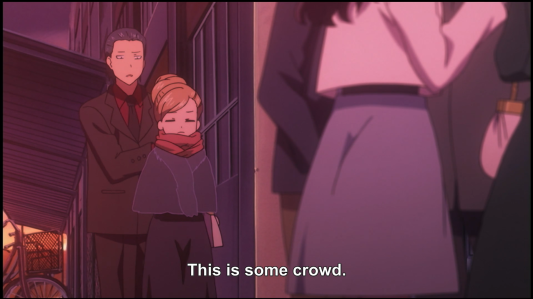 The scarf represents his love for Taiga, currently hidden under the disguise of fatherly care—shown by his comment about catching a cold. 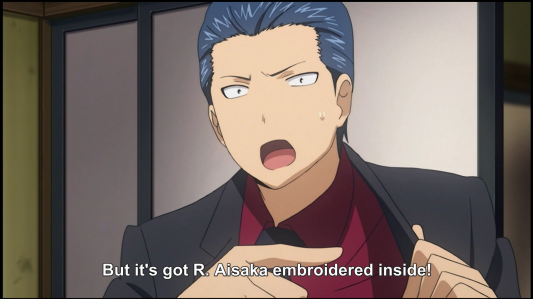 The suit starts as a symbol for Taiga’s love for Ryuji, as evidenced by the R. (Ryuji) Aisaka embroidery. It’s no coincidence her father’s name also starts with ‘R’, but more on that later. Anyway, easy-peasy symbolism. We’re so smart. 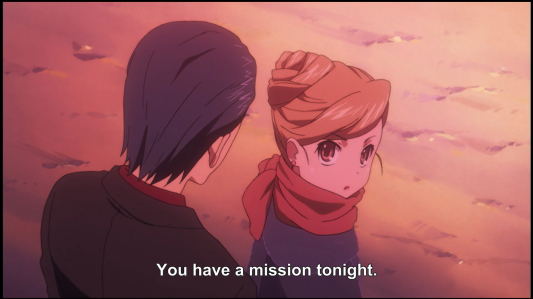 Since we’re so smart, we’re going to go through these symbols from simplest to most complex, starting with Ryuji’s gift. Despite originally being presented as the focal point of the episode, we kind of forget about it eventually. The episode begins with Ryuji phoning Minori, and Taiga even calls the gift Ryuji’s “mission” for the night. However, after the first five minutes, we never actually see the box again since it gets left in Ryuji’s suit. He leaves the gift behind to go be with Taiga, forgetting all about his affections for Minori. This mirrors how we forget about the gift. That’s all; it’s very simple, but when you realize it, you think: yeah, that makes sense—that’s how this should be. 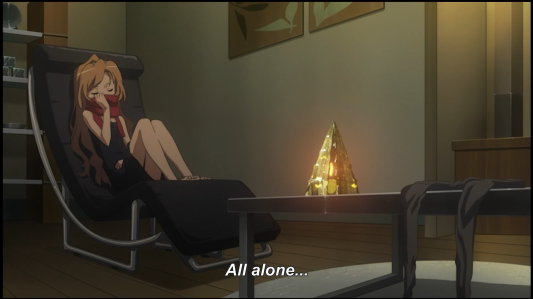 Let’s kick it up a notch. We know the scarf begins as a disguise for Ryuji’s true feelings for Taiga. It protects her from the cold like Ryuji wants to protect her. This all falls in line with what Ami calls “playing daddy.” When Taiga pulls the scarf over her face, all alone in her apartment, she’s seeking out that comfort Ryuji provides her with. She wraps herself up with his love, and the scarf doesn’t fall off until right before she removes Ryuji’s bear mask and forces him to meet with Minori. That is, when she lets go of Ryuji’s symbolic love/scarf, she pushes him away to another girl, thereby relinquishing his actual love as well. This is nearly as simple as the gift, but it sets the stage nicely for the final symbol that pulls everything together.

Taiga gives Ryuji her father’s empty suit that doesn’t fit anymore. These are all details mentioned in passing but they’re all huge. Taiga’s father abandoned his role as father when he took her step-mother’s side in their feud, thus leaving Taiga on her own. The suit doesn’t fit him anymore (like the role doesn’t fit him anymore), so she gives it to Ryuji, who fits into both the suit and the father role. All the unhealthy facades of Ryuji and Taiga’s relationship (the “playing daddy” of it) are jammed into the scarf and this suit. Here’s where things get a little more complex. 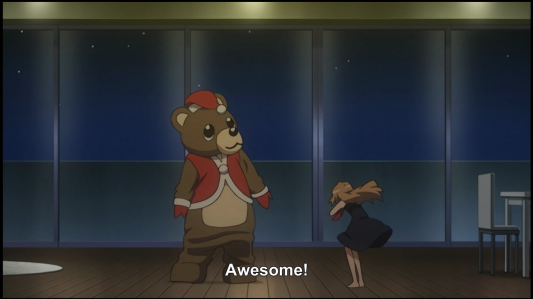 We get a glimpse of Taiga as a child before she lets bear suit Ryuji into her apartment—a clue that we should imagine her as said child. Taiga, with Ryuji’s fatherly affection still wrapped around her neck, begins to giggle and run around like a little kid when ‘Santa’ arrives. This is probably the highest pitch her voice gets all series. It’s also when she looks her smallest; Ryuji’s giant bear costume absolutely towers over her, making her seem very much like a kid. After seeing her tree, Ryuji spins Taiga around in the most cliché father-daughter bonding moment of all time. 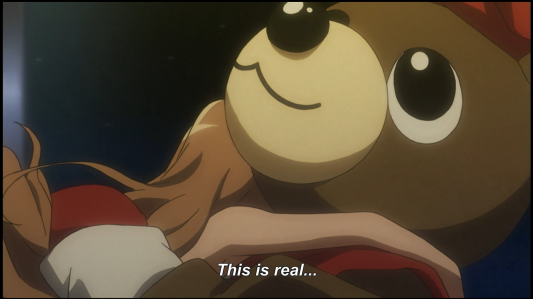 The irony is that when Taiga thinks about how “this is real”, we know it’s not. Ryuji can’t fill her father’s shoes, and the façade the two of them hide their feelings behind can’t last forever. Queue the scarf falling off and Taiga revealing Ryuji’s face. 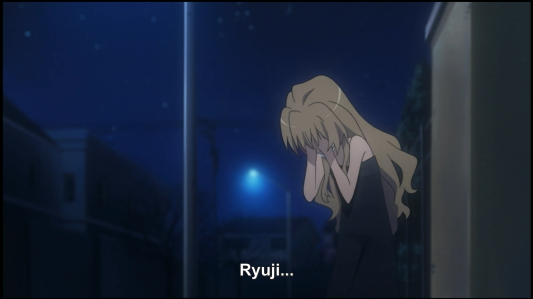 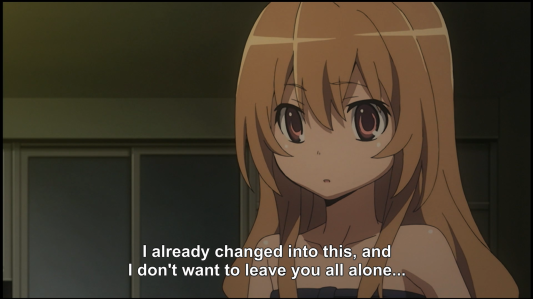 Ryuji briefly leans towards his true feelings, saying he left behind her father’s suit and doesn’t want to leave Taiga alone, but winds up unable to truly say how he feels. He doesn’t stop Taiga from pushing him towards Minori. Of course, Taiga doesn’t realize how she truly feels until she looks at the scarf on her floor. 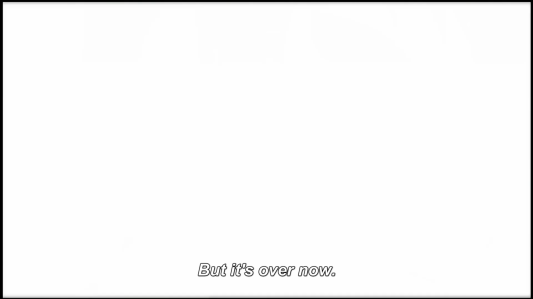 At the end of Episode 19, everyone is alone and heartbroken. They have yet to bare their honest feelings, and love has yet to save the day. At least they have some tightly-knit symbols to remember the night by. Merry Christmas!

2 thoughts on “Pieces in Place”