I hope you like symbolism because we’re about to talk about a lot of it. I’ll be trying to keep this tied to a theme, so hopefully I maintain the same focus as the previous essays in this series despite the broad topic. Once again, about half of the episode is dedicated to a lengthy storytelling sequence packed with absurd visuals, so let’s figure out what exactly we’re seeing.

Before Gaen even starts telling the story, the backgrounds reflect some of the themes of episode. The clouds and heavens swirling like a grand spiral above Gaen mirror the repetitive, cyclical nature of the Apparition Killer’s death and rebirth. It’s actually possible for us to predict the rough outline of the story about to be told if we pick up on this detail and a few keywords like “revive”.

Immediately, Gaen presents the idea of the sun as a vampire’s (an immortal being’s) weakness. Exposure to the sun is a sort of ‘death’ for vampires, although one they can be reborn from. For now, let’s just remember that the sun is generally associated with the passage of time and the beginning of a new day. Gaen’s explanation will be useful in a moment.

The statue that appears repeatedly throughout the sequence is a Hellenistic depiction of the goddess Hecate, who is strongly connected with the underworld, light, and necromancy. She is less popularly associated with vampires and spinning tops/wheels used in magic, and these connections will be useful for us as well. We should notice that light beams down from above onto Gaen, who is human. A barrier separates Gaen from Hecate, denoting a vampire hiding from light in the underworld.

But wait—now the main light source is coming from the underworld. What’s going on? If we backtrack a bit, we’ll notice the light source from above was actually the moon, as shown in a brief shot. Also, the stars in the fixture above Gaen represent a night sky. A light source opposite the moon must be the sun. Gaen doesn’t tell her story chronologically, so we’ll need to jump around a bit, too.

Hecate, our symbol of the underworld and vampires, is at first out of direct light. However, the Apparition Killer willingly bathed in sunlight in an attempt to kill himself. The Killer dies, only to be reborn over and over endlessly, a necromancy of sorts. This is why we see Hecate drenched in light. We then see the passage of time as depicted by the sundial clock, reminding us that the sun is the harbinger of time. We can think of a new day as a new life, and a new night as a new death—Symbolism 101, if you will.

Think of this not as the sun entering the underworld, but rather as the underworld coming to the sun. Specifically, think of the Apparition Killer swimming up out of the underworld and out into the sunlight, the new day, his new life. The Killer literally swims past what may be his many corpses to be reborn again. To die again. This vampire’s endless cycle of necromancy repeats just like the sun rises and sets—you might say because the sun rises and sets. Like Hecate’s tops and wheels, he is doomed to spin forever.

That’s kinda cool. The sequence pushes solar and underworld symbolism beyond cliché, and inverts their meanings in a way. All the symbols of time and repetition fit well with the presence of the sun, even culminating in that sundial shot. Neato. But maybe we can get a little more complex.

Shinobu Oshino, depicted here with blonde hair, an umbrella marked with an orange sun-like circle (note that this is an umbrella to block the sun, not the rain), and a bright glow around her. She approaches over some hills in the distance, looking quite sunny and vibrant with her colorful shawl and all. I’m willing to bet that if we pulled out our compass, she’d be approaching from the East. Are you excited for how cool this is about to get? I am.

Shinobu—in this instance—is symbolic of the sun, or perhaps they are symbolic of each other, depending. Take a moment to remember some of the associations we made earlier: the Apparition Killer seeks out the sun each rebirth, but the sun takes his life from him every time, returning him to the darkness of the underworld. The sun is something the Killer must step towards, despite it being the source of his death.

As Gaen reveals, the Apparition Killer had steadily been traveling towards Shinobu the past 400 years, making progress each life. He must expose himself to the sun because he needs to reach the sun. The Killer wants to find Shinobu to acquire the Kokoro Watari for reasons we can likely guess. Shinobu was his original death, after all. The first servant, the brightest human, the least submerged in the underworld, the one who killed apparitions, became one because of Shinobu. His human life ended when she drank his blood.

The Apparition Killer is stuck in an endless cycle of rebirth as the very type of being he wanted to destroy. This was all brought about by Shinobu, who killed a human like the true sun kills vampires. This is where all that inversion of symbolism began. A symbol of the sun, Shinobu, forces a human being to become a being of the underworld, thus inverting the sun into a harbinger of death rather than life. Shinobu is the first sun that brings the Killer death, and therefore she must be the last.

I believe the sentence after the picture below would be considered a spoiler (although it’s only speculation on my part), so you may want to avoid it. 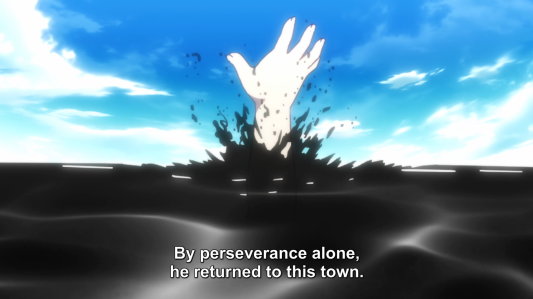 When the Killer can reach the sun/Shinobu and acquire the Kokoro Watari, he can finally end the cycle and reach a proper death in darkness, rather than one brought on by light–killing himself with the sword.