Master of the Minute (A Haikyu!! Analysis)

Just when I got done talking about all the history Season 1 of Haikyu!! gave us, Season 2 delivers the best backstory of them all. I’m not talking about Tsukishima’s story with his brother, I’m talking about the minute and thirty seconds we get for Yamaguchi. Yamaguchi’s backstory is a masterful piece of simplistic storytelling. As the series’ name says, this is a quick show, so let’s figure out just how much Haikyuu!! can get done in 1:30 (a caveat: I will be referencing and taking for granted what we know from Season 1, but like I said, a sequel succeeds by utilizing what it set up in the past).

Right off the bat, three lines: you’re a freckle-face, you’re puny, you need to bulk up so you can serve us. Each insult contributes something to Yamaguchi’s motivation, and explains why he is who he is now. Yamaguchi touching his freckled face as he stares into the mirror shows us that the person he used to be (to some extent, still is) is carved into his memory. The bullies calling him puny and pushing him around explain that Yamaguchi comes from a place of powerlessness—perhaps lameness is a better word. The complaint that Yamaguchi needs to be stronger to be of use to the bullies parallels his desire to become a better pinch server so he can be of use to Karasuno.

Of course, the bullies want to use Yamaguchi in a degrading way whereas Karasuno need him in a positive sense so that he can help their team reach new heights. A slightly better way to frame this is to think that Yamaguchi needs to be stronger/better to take action, and therein lies the parallel. Anyway, that’s 20 seconds down.

Enter Tsukishima—big, cool, and so easily able to take action that this bullying scene is beneath him. He just laughs and remarks how lame the bullies and Yamaguchi are. They could never hope to match him. But he’s not a savior for Yamaguchi. Yamaguchi is even aware that Tsukishima thought he was lame, too. Yet, it’s because he’s so far above Yamaguchi that he can be a source of inspiration. The bullies are only slightly cooler, but Tsukishima is leagues cooler. He doesn’t need to pick on Yamaguchi for validation, and therefore he can be someone to be envious of, rather than spiteful of.

If we think about the ‘now’ of the story, Tsukishima is the lame one and Yamaguchi is cool. The lame ones of the past were those who either couldn’t take action or took action against those weaker than them. Tsukishima was cool because he wasn’t caught up in the war of the lame. Who isn’t taking action in the present, though? Yamaguchi went to practice with the Karasuno graduates to improve his serving, and now he’s practicing extra with the Tokyo teams. That sounds like taking action on account of oneself. That sounds like he’s getting stronger, becoming cooler. 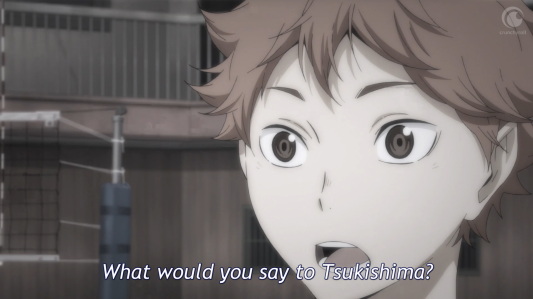 Tsukishima is not taking action and not practicing more than he has to. As Ukai said, he’s just going for the passing grade. Instead of putting all the insignificant worries of the lame beneath him, he’s getting caught up in them. He’s not focused on and secure in his coolness. This is something we the viewers are quickly able to notice. So when Hinata asks what Yamaguchi would say to Tsukishima, we know exactly what the answer is.

All it took to craft a minor character a backstory with convincing motivations and a relatable desire was a minute-thirty. We learn why Yamaguchi cares about volleyball, why he’s able to work so hard to improve, what precisely his friendship with Tsukishima is, and how he’ll be able to influence Tsukishima when no one else can. Think about cutting this backstory out—would Yamaguchi yelling at Tsukishima be half as convincing? Would the line about Tsukishima being lame have a quarter of the impact? Not at all. With 1:30 of screentime, Haikyuu!! added a whole other level of emotion to Tsukishima’s character arc, as well as created one for Yamaguchi. Impressive.