To Take the Painful Path – A Hibike! Euphonium Analysis

Hibike! Euphonium received a lot of early praise for its background art and character expressions. While the art and animation are top class, Hibike’s greatest strengths lie in its dialogue and cinematography. This analysis  will focus on Kumiko and Reina’s hike from Episode 8, specifically an expansion of Reina’s character and a major development for Kumiko’s. 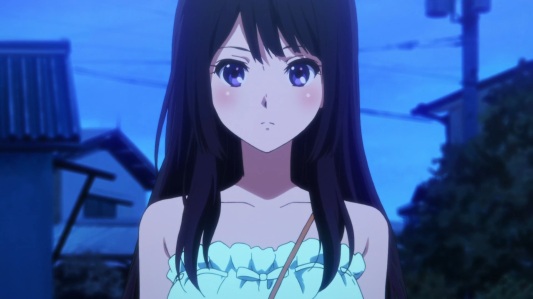 Let’s start at the start. The first time we see Reina, we get a panning shot of her white one-piece. Not a yukata, not some teenager’s casual-wear, but a formal, strapless dress. From earlier scenes of the night’s festival, we know everyone else is either wearing a traditional yukata or a casual outfit. If we don’t catch that ourselves, Kumiko points it out to us by saying Reina looks surprisingly cute, and then staring down at her own beaten sneakers. Right away, we are shown that Reina is different, special. 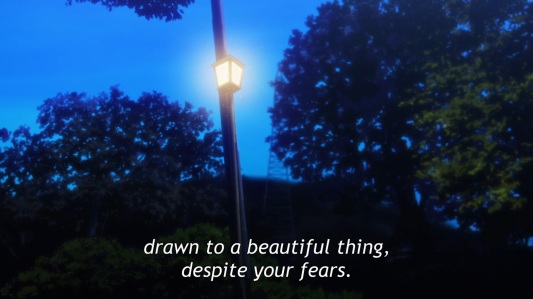 Now begins a series of symbolic visuals that will complement the girls’ hike, starting with the shot of bugs buzzing around a lamp. Just as Kumiko thinks about being “drawn to a beautiful thing”, we are shown the bugs drawn to the bright lamp. This parallels Reina and her white dress, bright against the night. This motif of Reina as shining light surrounded by darkness will play a major role throughout the episode (and the series as a whole).

Kumiko sets the stage, and Reina draws back the curtains. Reina’s explanation of the shrines–how the one they’re at now feels “classy and grown-up”–sparks a dialogue between her and Kumiko. Reina says she’s bored of her routine student life. She wants to “throw everything away.” Kumiko “kind of” knows what Reina means. And so, we have the establishment of Reina as special, the routine as normal and thus undesirable, and Kumiko as somewhere between normal and special. 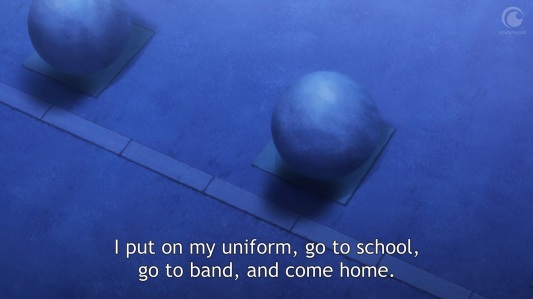 This same story is told visually. As Reina discusses the routine, we are shown identical spheres all spaced equidistant from one another. Mundane, standard, not special. When Reina says she wants to leave that plainness behind, she steps through the line of spheres and off the flat mountain trail. Kumiko follows, but later, slower, and at a less sharp angle. The same relationship is established, but the visuals do also hint at something we’ll learn for sure later: that Kumiko is following Reina towards the ideal of being special. 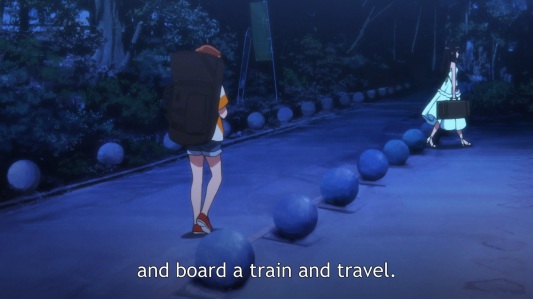 With both girl’s relative specialness established, they begin up a steep path. This is the path of those who wish to be special, and the path of pain. Reina ties back her hair and switches to carrying the heavier instrument of the two. We see the sores on her heels, but she say she “doesn’t hate pain.” She knows she can only buy her goal with pain (an awareness we’ll see again later). To be special is to suffer. It becomes more clear that Reina is leading Kumiko down the path to being special.

We also see that Kumiko is the only one who could stand side-by-side with Reina. What might be awkward conversation for the rest of the band members is just banter for these two. They call each other “freak” and “twisted”, but not to outcast each other. It comes across almost as appreciation that there’s another girl out there with such a “terrible personality.” As their banter ends, we reach the top of the mountain and the most important shot of the entire series. 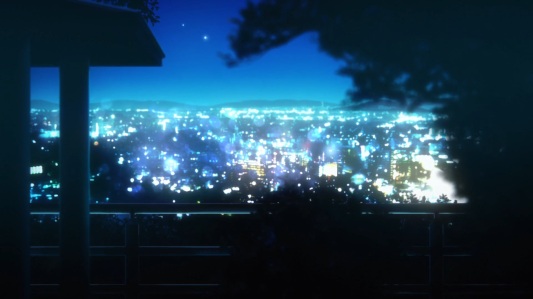 We see two stars (one slightly brighter than the other) separated from all the lights of the city by an expanse of sky. As you might have guessed, these stars are Kumiko and Reina (with Reina being brighter). All sorts of cinematic tricks are pulled with these stars, starting with the next shot of Reina.

All the city lights are blurred out, but Reina and the two stars are in focus. Reina says she didn’t really hike up here to see the city, and our eyes can tell. The city isn’t distinguishable. She goes on to say, of course, that she “wanted to do something the others wouldn’t.” She wanted to be special. This is all reinforced once Kumiko associates the city lights with the festival that’s going on.

So, with our two star girls separated from everyone else, Reina begins her speech. “Being relieved you’re the same as someone else is stupid.” She gets right to the point. That statement is interesting since, partway through the speech, she asks Kumiko if she understands, like she’s seeking some of that “sameness” in Kumiko (but that’s a discussion for a different episode). Regardless, Reina tells us, “I want to become special,” and playing trumpet is how she wants to do it. With how she invades Kumiko’s space, it’s like a challenge. I think you can be special, too, but can you shine as bright as me?

This shot of Reina’s head and the stars gets flak for weird framing, but it’s actually brilliant. Sure, the shot would look more pleasing if it “zoomed” out a bit, but this framing forces our focus onto the stars. We notice Reina. She’s clearly associated with the stars. However, our eyes naturally want to look at objects that are fully in view, so we drift from Reina’s cut-off character to the stars in the background. If you hadn’t picked up on the symbolism before, this shot forces you to. This matters because Reina isn’t speaking an aside, she’s speaking to Kumiko. The dim star that is Kumiko is the only person she can relate to while still being special. She isn’t alone in that sky, or, at least, she doesn’t want to be. We see this in that huge, empty shot of the sky.

Reina finishes her speech, declaring she’ll become “truly special.” Kumiko is completely sucked in. She stares at Reina, wide-eyed and mouth agape. She leans deep towards Reina. She is that dim star so far from the normal lights of the city, but so close to Reina’s shining star. She asks if Reina can really become special just by playing an instrument. Reina answers confidently: of course she can, and it’s going to take work and pain. She’ll keep practicing and keep playing. This is Kumiko’s turning point. She no longer views band as just some afterschool time-killer. It’s a painful path towards becoming special (which we discover all too well later in the series). Kumiko decides to become a star as bright as Reina. 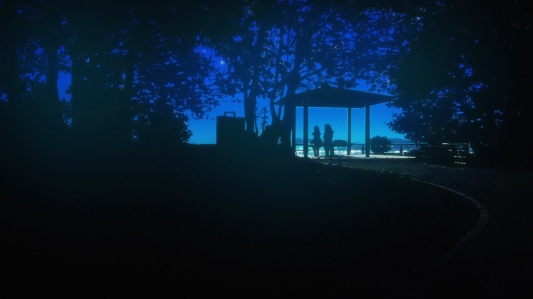 And how does the episode end? With our two special characters playing their instruments, their tools for specialness, against the night sky. We can see the two stars in the sky through the blackened branches of some trees.

What does it mean? Why does it matter?

Hibike! could have just been a cute show with gorgeous animation and an unimaginative story focus of bringing a high school band from zero to hero. It really could have just gotten by on cute characters and above-the-rest animation. Instead, the show devotes all that art and animation towards shots that waste no moment in telling us something about the characters and their relationships. When characters speak, we’re always learning about their beliefs and goals, and we’re always given visuals that either complement or develop what’s being said. Hibike! works so hard to show us that this story, and these characters, are special.

6 thoughts on “To Take the Painful Path”